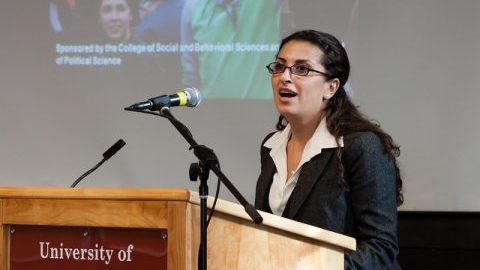 The event, titled “Opposing Views on the Electoral College,” was hosted by University Union and co-sponsored by the departments of history, communications, legal studies and political science.

The University Union started in 2015 with the mission to bring light to a diversity of opinions through the organization of debates. This event marked their third debate of the spring semester.

Mostapha Massaee, a sophomore biology major and member of University Union, kicked off the event by stressing the importance of this debate in terms of the recent controversy over the election of President Trump, who won the Electoral College, but not the popular vote.

“Everyone questioned the validity of the election,” Massaee said.

Katherine Newman, UMass provost and senior vice chancellor for academic affairs, moderated the debate. Before introducing the speakers, Newman emphasized the importance of hearing different opinions, rather than just listening to one side.

“We don’t hear enough give and take about the point of views of our time,” Newman said.

Amar, who spoke first, stood in opposition of the Electoral College, expressing his support for a direct popular vote. Within this system, all voters would be treated equally, with a one person, one vote policy where votes would carry the same weight.

According to Amar, the Electoral College discourages people to vote and has historically made it easier to suppress the votes of women and people of color.

“The electoral college is sub-optimal,” Amar said. “[We] could do better.”

Amar defended his position by pointing out that no states within the U.S adopt the Electoral College system when choosing their state representatives, but rather decide through popular vote. Additionally, no other country has chosen to establish an electoral college.

Amar also criticized the electors themselves.

“They are not wise people,” Amar said.

Professor Ahmed then introduced her position defending the Electoral College, acknowledging the controversy around the existence of this system, especially among Democrats.

“We are much better off with this mechanism than a direct popular vote,” Ahmed said.

Ahmed went on to describe three main points to support her position, beginning with the way the Electoral College helps serve minorities by giving them a seat at the table. Ahmed said that not only is the Electoral College better than adopting a direct popular vote, but it would be nearly impossible to abolish it. Rather than focusing energy on establishing a completely new system, time should be spent on more urgent matters, such as state legislative elections and the issues surrounding redistricting.

Stephanie Chan, a senior political science major, attended the event with an interest in hearing about the Electoral College. She mentioned the importance of looking at institutions within the U.S and understanding how they work.

Similarly, Adnan Mohammed, a sophomore accounting major, came to the event hoping to hear different viewpoints about the Electoral College. Mohammed expressed his interest in becoming a member of University Union and emphasized the importance of organizing more debates at UMass.

Professor Ahmed and Professor Amar went on to answer questions asked by Newman, University Union, and the audience.

Ahmed and Amar expressed their disdain with the way the recent presidential election turned out and admitted the election would be different if candidates ran campaigns based solely on popular or majority vote, rather than vote of the Electoral College. Even so, both Ahmed and Amar agreed that time and energy might be better spent focusing on other issues rather than attempting to abolish the Electoral College.

“I believe in democracy, but that requires us to do some work,” Amar said.

Carly Burgess can be reached at [email protected]