‘Wilson’ is the weird neighbor who is worth a chance 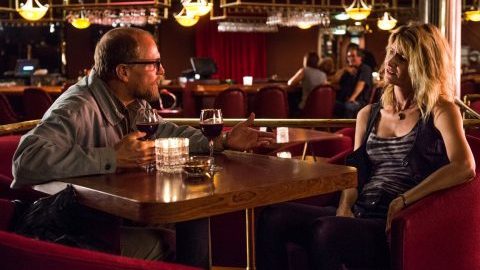 On the surface, Wilson (Woody Harrelson) is an in-your-face bigot whose need for attention and propensity for bizarre comments is bound to drive most people crazy. Throughout “Wilson,” it’s quickly revealed that it’s not wise to get on his bad side either, as Wilson can say some truly terrible things, like when he goes on a date with a “less attractive” woman and bluntly says “I just want to move on with someone new…but not you necessarily.” He’s not easy to like, to say the least.

Despite this loose-lipped behavior though, at his core, Wilson means well. During the film, he finds out that his ex-wife put their child up for adoption instead of having an abortion, as Wilson had believed for the past 17 years. He then seeks to spend as much time with his daughter, Claire (Isabella Amara), as possible, to the point where he begins to face the inevitable consequences of his ultra-abrasive behavior.

Wilson is never afraid to speak his mind, and some of the best comedic moments in the film come from his complete lack of a filter. During the film, Wilson is forced to serve some time in jail, and decides to compliment an inmate on his swastika tattoo, resulting in him getting hit across the face with a lunch tray. That’s just one example of the many physical consequences Wilson faces for his comments, a recurring trope that rarely fails to bring laughs.

“Wilson” is directed by Craig Johnson and written by Daniel Clowes (of “Ghost World” fame), both of whom construct an intriguing conflict throughout the script of the movie. Early on, Wilson learns that his ex-wife Pippi (Laura Dern) has recently relocated to Minnesota, and he sets out to find her.

Upon successfully learning Claire’s whereabouts, they begin working together to try and finagle their way into her life. Pippi though, presents a constant challenge for Wilson. Once he finally seems to be on the right track with Claire, Pippi always seems to come in at the worst moments to foil his plans.

Furthermore, Pippi’s fight with her sister Polly (Cheryl Hines) results in Wilson facing jail time. Yet despite all the hardships Pippi has caused, he is still madly in love with her.

This movie is about broken, complicated people searching for love and resolution. When Pippi tells Wilson that he is a father, his sudden, overwhelming desire to be a family man is understandable. But this conflict never fully develops, and it can make for some confusing scenes.

First, Wilson and Pippi stalk Claire at the mall and then drag her to an uncomfortable scene at the kiddie park to try to make up for 17 years of absence in just a few hours. Unfortunately, Wilson and Pippi fail miserably.

In addition, some elements of the film’s humor, in particular Wilson’s seemingly never-ending penchant for profanity, become grating. I would have preferred if Wilson’s jokes were more clever than crude, but these jokes do give the audience a stronger portrayal of Wilson’s character, and in that sense can be somewhat appreciated.

To put it rather lightly, Wilson does not make a great first impression. Great moments throughout the film come when he first encounters new people. He likes to sit way too close to strangers in public places, even when there are many other places to sit. He also loves to chat the ears off of strangers until they reach their boiling point. If those traits weren’t enough, he’s also that guy who likes to use the urinal next to another person when there are only two people in the entire bathroom.

Much like the character, “Wilson” initially makes a bad first impression, but like some of the characters throughout the film, its likeability steadily increases as it plays out.

Although “Wilson” may have taken a while to get on my good side, I’m thankful that it did.