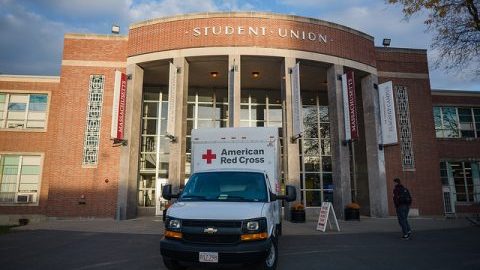 On Monday, Oct, 30, the Student Government Association discussed executing a $50 million renovation of the University of Massachusetts Student Union.

He argued that even the largest of agencies, such as The Massachusetts Daily Collegian and WMUA, are not able to fit in this atmosphere of student life, but instead relegated the basement. The Cape Cod Lounge and Student Ballroom, he noted, are difficult to use for smaller events due to their huge scope, making presentations less personable and influential.

Vitale also said he views the building as outdated and lacking adequate resources.

“There’s huge safety risks in the Student Union building,” Vitale explained. “There are no sprinklers other than in the ballroom. That’s clearly a code violation.”

He continued to explain that the building’s poor ventilation often leads to drastic temperature changes when walking from room to room, in addition to the asbestos and other harmful materials that are present throughout the building.

“It simply does not serve the needs of students at all in a 21st century learning environment,” Vitale stated.

After the Student Experience Master Plan Organization conducted a series of student surveys, CannonDesign was hired. They proposed a visual design of what the possible new Student Union could look like.

‘Main Street’ — the walkway in the area of the Hatch — serves as a marketplace for on-campus businesses such as the Arts and Crafts Center, Blue Wall and the Campus Store. Other student businesses are scattered throughout the Student Union. According to Vitale, the objective of renovating Main Street is to increase student traffic, which would then revitalize student business revenue.

CannonDesign’s visual plan is to create an area with more natural light and open space, resulting in more room for students in a more aesthetically pleasing area that is inclusive of all businesses.

The Student Organization Resource Office (SORC), is currently in the basement of the Student Union. According to the new renovation visual plan, the SORC would be the first desk that is present when walking into the main entrance of the Student Union. Filled with vibrant colors, modern glass and updated furniture, this lobby could be used as a study space and an area that allows for easier accessibility to the clubs that are located upstairs. Additionally, more conference rooms would be added, replacing storage rooms that must be rented out by different clubs for usage, currently called ‘swing spaces.’

The building proposal is also designed to be more sustainable and handicap-accessible in accordance with the Americans with Disabilities Act. The carbon footprint of the future structure is still being addressed, and will be a large factor when choosing the architecture company that will construct the building.

The building itself is supposed to represent a major change to how students are able to function on this campus.

The total project is estimated to cost approximately $50 million. Chancellor Kumble Subbaswamy has committed to paying $25 million toward the renovations, but the other half of the funds must come from students. Undergraduate students are currently paying $131 to the Student Activities Trust Fund (SATF) every year, which goes to the SGA. The total sum is then divided among all of the RSOs as their budget for the year. With the proposed renovations, the fiscal year of 2019 would result in a $50 fee increase to all undergraduate students, raising the per-student sum to $181. By the fiscal year of 2020, this fee will increase again to $231 for all undergraduate students. These additional fees will apply toward financing the new building for the next estimated 25 years, until the building is officially paid off.

“What if there is a need to raise the SATF fee for other reasons during the construction of the building?” asked Sen. Allie McCandless, a freshman political science major.

The answer is that the already growing building cost of the SATF fees will prevent this from happening, Vitale said. Predicted by the pattern of RSO membership remaining constant, this fee increase is unlikely to diminish the amount of students who participate in RSOs. If the referendum for the building is passed, any proposed SATF fees during the time of construction will undergo elections in a fair manner,

“I was wondering if we could get a better idea of the timeline, talking about construction if this referendum were to pass,” said Cobi Frongillo, a junior economics and poltical science major and SGA Secretary of Public Relations.

Despite the project start date still being unknown, construction is estimated to last a year and a half. The first phase of the project will be completed once a referendum — held sometime this semester — is passed. The proposal will then be taken to receive board approval in the spring. According to Vitale, if all goes according to plan, the building renovations should begin in summer 2019.

Gretchen Keller can be reached at [email protected]