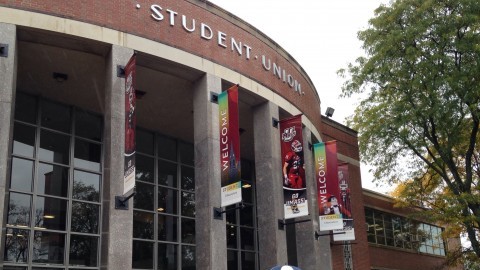 Author and Pulitzer Prize Winner Viet Thanh Nguyen delivered the annual Troy Lecture hosted by the University of Massachusetts English Department, joining the ranks of other prominent authors who have given the lecture such as J.M. Coetzee and Salman Rushdie.

Nguyen read excerpts from his Pulitzer Prize-winning book “The Sympathizer” as well as from his new collection of shorts stories “The Refugees” in the Student Union Ballroom on Wednesday. Nguyen also talked about the struggle of being a minority writer, a writer in general as well as the memory of war.

“Every war is fought twice, once in battle, once in the mind,” Nguyen said. His lecture was centered around the way in which American society, as a whole, remembers or misremembers. He gave the example of the Vietnam War.

Nguyen discussed how past presidents have mischaracterized the Vietnam War as “noble but flawed.” He quoted President Jimmy Carter, saying that the Vietnam War was a war of mutual destruction. According to Nguyen, around 60,000 American civilians died in Vietnam, which he described as a human tragedy. He also said that the war can’t be seen as “mutual destruction” when three million Vietnamese people died, and not a single bomb was dropped on the United States.

He also said that remembering others comes in two categories: radical and liberal. The liberal category is the belief that everyone is human; this often leads to concepts such as ethnic literature and Black History Month or ideas that work to “validate people’s humanity.” Nguyen said that the radical category means remembering oneself as inhuman, and the other as human. Accordingly, this paints a picture in which the self is inhuman yet complex, while the other is human but one-sided and simple.

Nguyen said that his goal in writing “The Sympathizer” was to depict a more accurate picture of human life in which no person is one dimensional—be it purely evil or purely good.

“We need to recognize our humanity and our inhumanity,” said Nguyen.

“Ethnic writers should not translate their work,” said Nguyen.

Nguyen tried to move away from traditional ethnic writing, but he said he had a hard time getting “The Sympathizer” published, as his book deals with the memory many Americans associate with the Vietnam War.

“Thirteen out of 14 publishers turned down the book, and the one that ended up buying it was English.”

Peter Fath, a junior studio arts major, said that as a writer, he appreciated that Nguyen writes his own way. Fath said he especially related with Nguyen when he said that he hated writing 99 percent of his new collection of short stories.

“It is really difficult, but really rewarding,” said Fath.