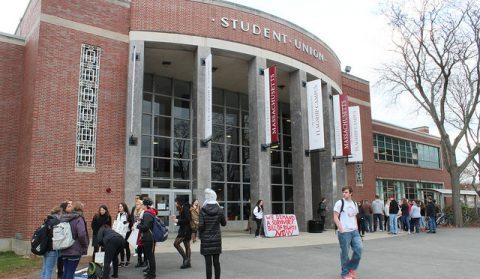 The Student Government Association works on legislation, projects and initiatives year-round relating to the University of Massachusetts campus community. As a governing body representing UMass students, the SGA often interacts and collaborates with University administration to change or develop policies for students. As the end of the fall semester approaches, here are three initiatives and updates from the SGA:

The referendum to approve or deny a $50 million renovation project to the Student Union will take place from Dec. 4-7.

If approved, the renovation would provide additional space to Registered Student Organizations at UMass, and would address safety concerns surrounding the lack of a fire sprinkler system, as well as an apparent asbestos problem.

According to SGA Director of External Operations Sarah Nordberg, the fee would be raised for approximately 15 years in order to meet the project’s costs. Initial estimates from Nordberg have construction time for the renovations taking approximately one to one-and-a-half years.

A similar referendum failed in 2013, but Nordberg and SGA Vice President Lily Wallace attributed its failure to the proposed fee increase being much larger than it is for this year’s proposal.

Present policy for outdoor speeches and rallies during class hours limits demonstrations to the “west side of the Student Union Building,” according to the UMass Land Use Policy.

“I am meeting with the vice chancellor to shape the direction of the land-use policy in relation to changing space proposals,” said SGA Associate Speaker Claire McGladrigan, reading a statement provided by Attorney General Jiya Nair, who was not present.

Currently, the Student Activities Office must approve of “the time, place and manner of any activity, program, or event,” according to the Land Use Policy. Campus demonstrations and rallies are limited by a number of university policies; Nair is working with University administration to adjust present limitations.

In response to apparent problems with laundry services throughout campus, Residence Hall Association President Max Roemer is investigating a potential update to the present system.

In place since 2009, laundry machines throughout campus have recently exhibited a variety of problems, according to Roemer.

“The problems are various,” Roemer stated via email, “ranging from machines not taking UCards/coins to machines not working at all.”

Before the semester ends, Roemer will be meeting with Jean MacKimmie, the director of residence education at UMass, to discuss a potential plan to update laundry services on campus.

Neither the University administration nor UMass’ laundry vendor have approved any plans, but Roemer says a committee will be formed to gather student input on how to best educate students on proper machine usage, also advocating to “upgrade machines in the worst spots.”

While a proposal has not yet been floated, Roemer said in an update to the SGA general body that he wants the quality of laundry services throughout campus to meet standards that can be found in the Commonwealth Honors College. Honors College dormitories opened in 2013.

Will Soltero can be reached at [email protected] and followed on Twitter at @WillSoltero.