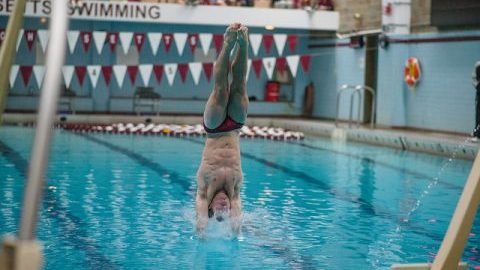 College diving is a sport that doesn’t lend itself to producing strong team chemistry, yet the Massachusetts diving team is a tight-knit group.

With the team’s upcoming meet at the Frank Elm Invitational serving as the NCAA Championships qualifier for Zone A, it could be easy for the divers to focus on themselves. However, the team is embracing first-year coach Joshua Arndt’s team-first attitude.

“We try to keep them together as much as we can, even though when they step on the board, they are by themselves up there,” Arndt said. “They are going to be cheering for each other. But, diving is a very individual sport when it comes down to it and they are going to be competing against each other for the top spots.”Both the men’s and women’s dive team will be heading to Piscataway, New Jersey for the two-day meet Friday and Saturday.

Arndt’s expectation is that the team members support one another, and he makes sure the team’s preparation reflects that mindset.

“Today we did a team workout where we put them into teams and competed against one another, and then had a reward system [where] we got a cookie cake for the winners,” said Arndt of how he promotes team chemistry.

Team unity could prove invaluable this weekend, where the divers will be competing in their largest meet so far, against more than 50 women and 30 men.

While the meet will serve as a benchmark to see where the team is as a group, it will also act as an opportunity for UMass to compete against some of the best divers from other schools as well.

Even though Arndt wants the team to be there for one another this weekend, he also understands the divers are all competing with one another.

“I’m looking forward to everybody having a great meet, and figuring out their warmup routine and what it’s like for them to go into a big competition,” said Arndt.

Sophomore Reece Donahue is one of the divers who looks to have a big weekend. The Atlantic 10 reigning finalist is coming off of a strong meet where he posted a 281.40 in the 3-meter.

“I just want to do well, and try to hit 300 from each board,” Donahue said. “I’ve been working hard in the pool, so I hope it works out.”

Another diver who projects to have a successful meet is senior Emma Roush. Roush has finished first in both dive events at every meet but last weekend’s meet when she took first in the 3-meter and first in the 1-meter.

Still, she hopes the team as a whole can be successful, not just herself.

“I’m working on being consistent and doing everything the same, every time,” Roush said. “I think that it would be really cool if we could all get into finals.”

Roush has already cracked the 300-point mark three times so far this season, and hopes to add to that total this weekend.

Noah Bortle can be reached at [email protected]