UMass football closes out its season against FIU 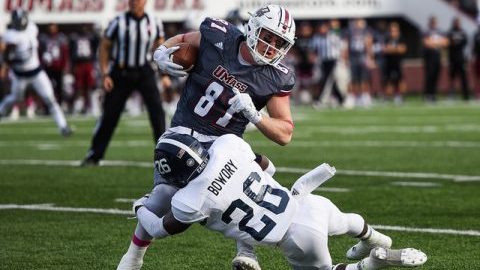 While conferences around the country wrap up their seasons with championship games, the independent Massachusetts football team will travel south to Miami, Florida, where it will conclude its season with Florida International.

FIU has served as a win on the Minutemen’s (4-7) schedule each of the last two seasons; however, this Panthers team is different from those of the past. Sitting at 7-4, they are on the verge of a bowl game.

“Yeah, we beat them in the last two years, but this is a totally different football team even though it’s the same group of guys,” UMass linebacker Steve Casali said. “They got a new coach, and they got a lot more wins than the last two years. Their offense is very physical, very fast, so I think it will be a good football game.”

“This game is huge, I think it is one of the biggest of the year because it sets the younger guys off for their offseason,” Casali said. “Even though it’s my last game, it’s very important to win this game for the younger guys and for the foundation of the program.”

Under new head coach Butch Davis, the Panthers have gone on two three-game win streaks and started their season 6-2. Their 42-17 win over Western Kentucky Nov. 24 snapped a two-game losing streak.

Since the midseason double-bye week in which the Minutemen entered 0-6, UMass has won four of its last five.

“It would be a lot better with a win, to finish winning five of our last six with a really close loss to Mississippi State,” redshirt senior Adam Breneman said. “But I’m proud of what we’ve accomplished here and being able to be a part of it and being one of the leaders of it. The turnaround that we had, I think it would have been really easy of us to quit when we were 0-6, I think it was one of the better stories in college football how we were able to turn this thing around. I’m happy for the rest of the seniors, I’m happy for the younger guys, I’m happy for our coaches and coach [Mark Whipple] for putting in so much time. No matter what happens, I’ll have really fond memories looking back on this season.”

Casali and Breneman took their time walking off the McGuirk Alumni Stadium field after practice on Wednesday. It would be the final practice for them in UMass uniforms since both have used up all of their years of eligibility.

After three years at Penn State, Breneman – who was close to quitting on football – transferred to UMass. What has transpired for him over the last two seasons has helped change the course of his life.

“It has been really fun and really special for me being a part of [this team],” Breneman said. “This place has meant a lot to me and will always have a special place in my heart. Kind of the place that I came to revive my career and the people here, the coaches and coach [Whipple] have done so much for me. So UMass will always be a really special place for me.”

Breneman, currently in all online classes, is expected to go back to his home in Pennsylvania shortly after the Minutemen’s game in FIU. He will then begin preparing for the Senior Bowl, the Pro Bowl and ultimately the 2018 National Football League Draft.

For Casali, his time at UMass has been much longer. A redshirt senior, Casali has been with the Minutemen since 2013. For him, UMass the school has served him just as well as UMass the football program – if a career in the NFL does not pan out, Casali hopes to become a high school athletic director.