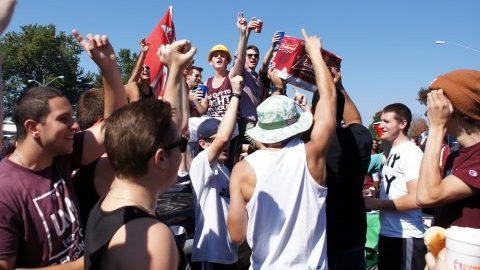 Editor’s Note: Since the publishing of the original article, the name of the man accused of the OUI Liquor arrest has been redacted as he was never convicted, and the case is still pending.

It has been about three weeks since the warm days of Homecoming weekend. University of Massachusetts students may recall a band marching, parade floats or the morning’s tailgate.

But, to the Werner family, focus is drawn elsewhere. Sophomore resource economics major Jackson Werner lays in a hospital bed at Baystate Medical Center in Springfield. His mother, Elizabeth Werner told the Massachusetts Daily Collegian that he is in a neck brace, and is dealing with the pain of serious injuries including fractured cervical bones, fractures to the leg and knee and a concussion after allegedly being hit by a car the evening of Oct 21.

According to the Amherst Bulletin weekly police logs, an accident occurred at 6:39 p.m. on 253 Triangle St. The report showed that a pedestrian was hit on the roadway and the driver is facing charges for OUI Liquor causing serious injury.

The Amherst Police Department said they could not release the full crime or accident reports because the case is still pending, and not yet on public record. MassLive included a short brief on the case in their roundup of reports over homecoming weekend. Other than the brief, Werner’s story went largely unreported.

Weeks later, Werner is still in the hospital dealing with the aftermath of the incident. His mother is worried about health insurance, her son’s recovery and finding the best way to go about their lives after an accident that will put Werner out of school for weeks.

“UMass really doesn’t do enough to talk about not just drinking, but drinking and driving. I wish there was more education essentially,” said Jackson Werner to the Daily Collegian.

The day of the accident, Werner and his friend Jakub Polanowski were walking by the road after dropping off Polish food at the UMass Newman Catholic Center,  returning to the Zipcar Werner had rented. The two planned to return the car, and then get ‘late night’ at Worcester Dining Commons, according to Polanowski.

Plans changed as Polanowski recalls sitting in the car parked on the side of the street, watching as Werner got out and carefully crossed the lighted street in order to get the zipcar garage door opened, as the electronic garage door opener had not been provided. Just a few seconds later, he witnessed his friend being hit by a vehicle.

“He went above and over the windshield,” Polanowski said. He mentions that the driver didn’t make any attempt to break until Werner was hit. “You don’t send someone flying over the windshield of a car at 20 miles per hour, so he was going fast…there was no attempt to stop until after Jackson was hit.”

Quickly, he called 911. He said the ambulance arrived about four minutes later. After talking to officers, Polanowski rode in the back of the ambulance with Werner.

According to Elizabeth Werner, she went to the Whitmore Administration Building a few days after the accident to find resources for her son. She was surprised to find that administration hardly knew what happened, and sent her from “department to department.”

“It just breaks my heart,” said Elizabeth Werner, who has found working with the University very difficult, due to major lapses in communication. She spoke on poor in-person interactions with the UMass administration, as well as structural issues in how the University has not provided adequate support following the accident. Werner’s residential assistant or faculty advisor were not notified as to why he was no longer on campus, according to his mother.

Elizabeth Werner also addressed concerns regarding the Amherst Police Department’s lack of communication with the University in regard to her son’s case. She said that Triangle Street is right off campus, and if a student goes off into intensive care after an accident, Amherst Police should notify UMass of said accident. She highlighted the importance of such communication, especially after a busy weekend for parties, such as homecoming.

“Communication has been really poor. I never want another parent whose son or daughter is a victim to have to go through this,” Werner said. “No parent should go into Whitmore hysterically crying and being told ‘no, we don’t have time to talk to you.’ [The University] needs to actually start caring about students.

UMass spokesperson Ed Blaguszewski said the University has a whole set of  processes and protocol to connect people to, whether it is help for medical support, counseling, adjusting to school work, or transitional financial support.

“My understanding is we have been in contact with the family to connect them with a range of resources,” said Blaguszewski. “We very much want to help the student and the family, and do all that we can to support them in a difficult period.”

Caeli Chesin can be reached at [email protected]