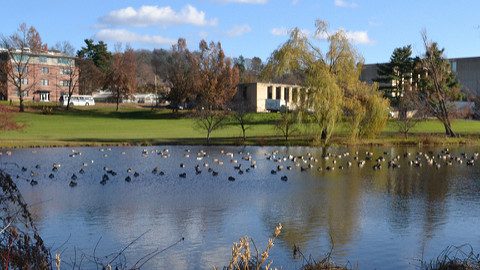 Calvin Morrill, professor of law and sociology at the University of California Berkeley, gave a lecture entitled “Navigating Conflict: How Youth Handle Trouble in a High-Poverty School,” this past Friday, Dec. 8.

Morrill discussed his ethnographic fieldwork conducted over the span of 16 years at a racially and ethnically diverse, high-poverty high school in Arizona. He spoke about the unique nature of this high school, choosing to keep the name of it anonymous, as it was high-poverty, yet the safest by far within its district.

Morrill started off his lecture by explaining the challenges he and his team faced with getting the teens to speak openly and unguardedly with them.

“As you can imagine, it can be difficult as someone who is older and white to engage with youth in a largely nonwhite context,” Morrill said. “We really wanted to engage youth voice, and to meet that challenge we engaged in a number of exercises and projects. We had students draw maps of the school, engage in a collective photo project, and write essays describing their trouble cases and instances of conflict.”

He then went on to explain how they used the student-drawn maps to give them insight on how the school operates in terms of its social hierarchies and dynamics.

“We paid a good amount of attention to socio-spatial context—the way youth and adults respond to certain places on campus and certain places off campus,” Morrill said. “We revealed and discovered that youth were able to move to different places within the campus, which is not largely territorialized unlike many other high poverty schools studied by other scholars. Many other high poverty high schools are cut up by gangs, neighborhoods, et cetera. This high school was unique in its ability for students to be able to move across spatial, racial and social lines.”

Morrill proceeded to explain research that supported his idea that social trust within the school helped create a safe environment, unlike many other high poverty high schools within the district and nationwide.

“We did a survey of youth in the late 1990s, and the survey indicated how much social trust there was within the campus,” Morrill said. “By social trust, we mean the expectation to be treated in a reasonable and dignified way. Social trust included institutional trust, in that students trusted the school. It included intergroup trust across different racial divides, and finally trust interpersonally at the relational level.”

Jamie Rowen, a professor of legal studies at the University of Massachusetts, commented on the lecture’s usefulness toward positive policy measures.

“I think we can learn that the way we present youth reflects the policies we implement,” Rowan said. “If we present the youth as resilient rather than violent, we present policies based on that. Divisive policies within the country becomes problematic when we look at intergroup conflict.”

Holly Laws, a lecturer at the Center for Research on Families at UMass, was most interested in the group dynamics at play within Morrill’s research.

“I’m a psychologist, and thinking about interpersonal conflict from a group context is very interesting. I think he presents a hopeful story,” Laws said.

Katie Billings, a graduate student of sociology at UMass, expressed her appreciation for Morrill’s research and its originality.

“As someone who is reviewing his book for the ‘Law & Society Review,’ I think his viewpoint and research is very original as he draws from over 16 years of experience and data,” Billings said. “I think it is much more persuasive and valuable given how much research was conducted.”