The department of Judaic Studies makes a disappointing decision 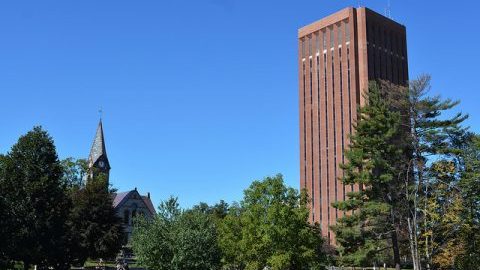 On Wednesday, November 29, two academic discussions were held at the University of Massachusetts on the topics of anti-Semitism and the Israeli-Palestinian conflict. The events happened at the same time, 7 p.m., in different buildings, a physical separation representative of the ideological divide between the discussions. At one event, two UMass professors, Sut Jhally and Joseph Levine, joined forces with Vijay Prashad, a professor at Trinity College, to discuss the exploitation of the label “anti-Semitism” to suppress criticism of Israel’s actions toward Palestinians. Their event was sparked by a Daily Collegian columnist’s unfair representation of Thomas Suarez as an anti-Semite after he gave a talk criticizing Israel at UMass in September. On the other side, the Department of Judaic and Near Eastern Studies held a symposium on the general topic of “Antisemitism and Islamophobia: Historic Perspectives and Civic Engagement Against Hate in 2017.”

It was not a coincidence that these events occurred on the same day, at the same time, and in different buildings. Within only a few weeks, members of the Judaic and Near Eastern Studies Department organized their panel in an effort to compete with and discourage students from attending the “Exploiting Antisemitism” event, which had been planned for over a month. Leaders of the “Antisemitism and Islamophobia” event even admitted to such. Jonathan Skolnik, one of the event organizers, said, “I felt something had to be done to shift a negative discussion to a positive one…I felt it was best to take a cue from Michelle Obama (‘When they go low, we go high’) and do what university departments can do best: organize a thoughtful, intellectual panel with expert scholars and accomplished activists with diverse perspectives…for the education of students and the community.”

The Department of Judaic and Near Eastern Studies definitely did not turn a negative discussion into a positive one, and they most certainly did not take the high road. Their actions were disappointing and petty. I can only compare the situation to a spoiled child taking their ball and going home when they don’t like the score of a game. In their attempt to stifle academic discussion, they did a great disservice to UMass students and the University as a whole.

As an intellectually curious college freshman, I was torn as to which event to attend, as I would have appreciated hearing perspectives from both sides of the Israeli-Palestinian conflict, and I’m sure many of my fellow students felt the same way. In the end, I chose to attend the “Exploiting Anti-Semitism” panel because I committed to going long before I even knew about the “Antisemitism and Islamophobia” symposium. That being said, I will not be commenting on the events of “Antisemitism and Islamophobia,” nor will I share my largely naive opinion on the Israeli-Palestinian conflict. What I will say is that I learned a lot from my attendance of “Exploiting Anti-Semitism,” and I gained a new perspective on an issue that I have had little exposure to.

In no way did I find the event to be negative or harmful. Anyone who makes the charge that the talk was anti-Semitic clearly was either not in attendance or has very biased and selective hearing. Did I agree with everything that was said? Absolutely not, but that is the point of having these discussions on campus. I was able to listen to experienced intellectuals present the facts, as they know them, and I learned a lot from what they presented. I believe that the professors who organized the “Antisemitism and Islamophobia” event could have benefitted in the same way as I did. It is deeply disturbing to me that certain high level academics at UMass aren’t tolerant of opposing viewpoints being voiced, to the extent that they feel the need to host counter-events at the exact same time. If our professors are really not open to hearing a different opinion to their own, maybe they should rethink their career paths and maybe we should reconsider who is teaching our classes.

Regardless of the Judaic and Near Eastern Studies department’s intentions, their actions only hurt their cause. Students like myself who would have loved to attend their panel and would have learned a lot from their opinions are now worse off because we weren’t able to hear their side of the argument. If their event had been held on another day or even another time, more people would have been able to hear their message and be better educated.

Politically I’m very moderate, and by no means am I a free speech absolutist or raving conservative, but it saddens me that respected members of my University have employed the largely leftist tactic of attempting to silence voices they don’t agree with. I trust that the majority of the student body would agree that UMass should be a University where a difference of opinion and debate are encouraged. I signed up to attend a large, public University, not an ideological safe space.