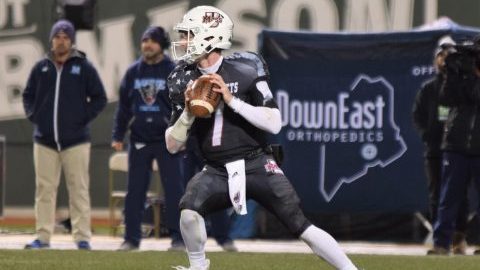 The Massachusetts football team dropped its final game of the 2017 season, losing 63-45 to Florida International Saturday afternoon in Miami.

Minutemen quarterback Andrew Ford threw four touchdowns, Marquis Young rushed for 125 yards and a score, and wide receiver Andy Isabella caught seven passes for 95 yards and a touchdown, bringing his total receiving yards above the 1,000-yard mark for the year.

Middle linebacker Bryton Barr was the defensive catalyst for UMass, totaling 12 tackles and a 13-yard sack on FIU quarterback Alex McGough (20-for-25, 295 yards, three touchdowns and one interception).

Both teams traded a pair of touchdowns in the first quarter but the Panthers pulled away in the second, notching three touchdowns to take a 35-21 lead into the halftime intermission.

The Minutemen outscored FIU 10-7 in the third quarter on a 36-yard Logan Laurent field goal and a 2-yard Adam Breneman touchdown reception to bring it to 42-31.

The Panthers flipped the switch again in the fourth quarter, tallying three scores, to pull away and hand UMass its eighth loss.

Ford finished 30-for-44 for 349 yards, four touchdowns and an interception in the defeat. Wide receiver Jessie Britt concluded his freshman campaign on a high note registering 101 receiving yards on five catches and added a touchdown catch at Ricardo Silva Stadium.

Laurent’s field goal make moved the senior into first place on the Minutemen’s top-10 list for career field goals made (32).

Despite the loss, UMass’ four wins were the most in their Football Bowl Subdivision history (2012-present).