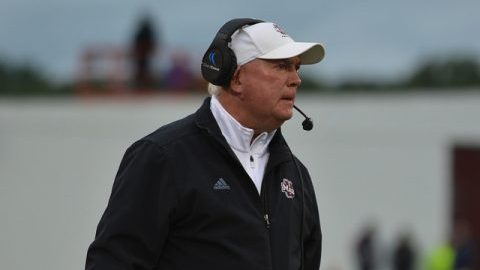 Six weeks into the Massachusetts football team’s season, it appeared that UMass coach Mark Whipple’s time in Amherst was over. The team was 0-6 and, given the strength of its remaining schedule, looked destined for another two-win season at best.

But the Minutemen turned it around, winning four of their last six to finish the season 4-8, the most wins they’ve had since becoming an FBS team.

He later confirmed to Matt Vautour of the Daily Hampshire Gazette that Whipple will be getting an extension on his contract.

“He’ll be back and we’ll extend him. We’ll get into conversations with him or his representatives in the next couple of weeks,” Bamford said to the Gazette. “I told him to just focus on getting his class signed. He and his staff are leaving to go on the road (Saturday night).”

The UMass hockey team is 14 games into its regular season, less than halfway through, and have already surpassed their win total from last season and tied that of the 2015-16 season.

The Minutemen’s most recent win, a 4-2 victory over University of Connecticut at the Mullins Center, not only featured UMass’ largest attendance of the season at 3,776, but also helped them earn six votes in the most recent USCHO.com rankings.

Though not yet ranked, the six votes are an increase from last week when the Minutemen received one for the first time all season.

It started with Minnesota, then continued with Brigham Young, followed by Quinnipiac and now South Carolina. The once 3-1 Minutemen are now 3-5 following their loss to the Gamecocks on Saturday.

Despite leading at halftime, UMass couldn’t overcome South Carolina’s second-half push. However, the most notable discrepancy on the stat sheet was in the free throw column.

Seventeen of the Gamecocks’ points came from the charity stripe out of twenty-nine attempts, but the same could not be said for the Minutemen.

UMass went to the line only five times. Getting more fouls was a point of emphasis by UMass coach Matt McCall in the postgame press conference.

“We have to find ways to get fouled and be more physical,” McCall said to the Daily Hampshire Gazette following Saturday’s game.

Though the Minutemen weren’t on the receiving end of many fouls, they did hand a lot out. Five Minutemen finished with four or more fouls by the game’s end.

UMass will have its next chance to snap its losing streak Wednesday night vs. Holy Cross at the Mullins Center.

Women’s basketball takes 2-of-3 in Texas

Three weeks ago, the UMass women’s basketball team traveled north, and this past weekend they traveled south.

With games lined up against Incarnate Word, Texas Rio Grande Valley and Mississippi Valley State, the Minutewomen took two of the three, their only loss coming to UTRGV.

The team’s most dominant win came in its final game against Mississippi Valley State on Saturday, where UMass dominated 85-46. Hailey Leidel led with 25 points while Maggie Mulligan recorded a double-double. The Minutewomen ended up shooting over 40 percent overall and from beyond the 3-point line.

After defeating Incarnate Word handily, UMass fell to UTRGV on Friday 67-59, despite outscoring the Vaqueros 21-15 in the fourth quarter.