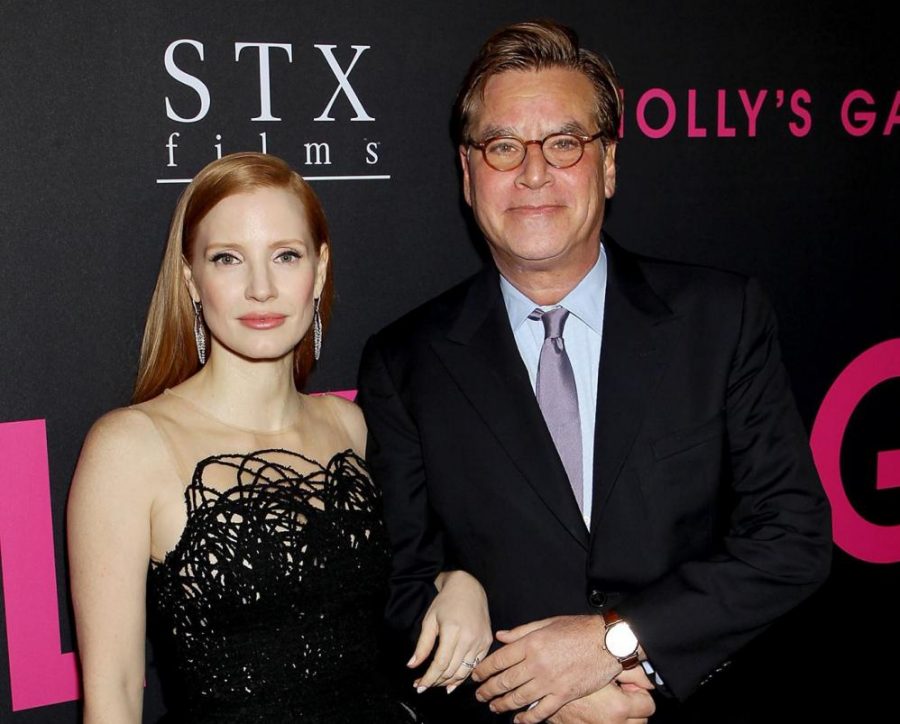 Aaron Sorkin may be the best known screenwriter of the 21st century, and there’s a reason for it. He’s known for fast-paced dialogue that may overwhelm a first-time viewer. For his characters, the stakes are high, the pressure is on and the risks are sometimes too great. These themes recur throughout his directorial debut.

“Molly’s Game” tells the story of Molly Bloom (Jessica Chastain), a former ski racer, who ran high stakes underground poker games for the rich and famous like Leonardo DiCaprio and Alex Rodriguez. The story is told in flashbacks as Molly is facing federal court, much like Sorkin’s earlier film “The Social Network.” The opening scene makes it clear that this is an Aaron Sorkin film. Every word and sound is in sync and has a specific place and purpose, like a beautiful symphony. In Sorkin’s films, words aren’t just dialogue, they’re weapons and instruments.

Sorkin uses this fast-paced strategy in the entire first act of the film, but then slows down the pace. He allows his characters to breathe, observe, learn and feel, which is rare in his films. It is only when Chastain performs her lengthy and feisty monologues that you remember who wrote this film. These kinds of intense insertions may have been done because the tempo of this story is naturally slower than his other films, which revolved around the ever-changing internet (The Social Network, Steve Jobs). With the internet (especially in the 1980s and 90s), nothing stayed the same for long. Technology and products were either rapidly successful or a massive failure within their launch. This is not the case with poker. It’s not about coming up with the idea of the century first, it’s about getting to know your opponent. It’s about learning their personal ticks, their strengths and weakness and making them comfortable as you rip the floor from underneath them, which takes time and patience.

Sorkin’s scripts are the ultimate challenge for actors and only the best survive them. Jessica Chastain barely makes it out alive. Chastain is in every single frame of this film and doesn’t have a steady scene partner. Characters go in and out as if they’re guest stars on a television show. She performs her monologues well, impressively barely taking a breath between sentences, but she doesn’t allow the audience to see the character. She has so many walls built up in her body language and face that she comes off cold and unapproachable. There are moments where we get a glimpse into who the true Molly is, like when her lawyer (Idris Elba) asks her why she won’t give the FBI names of celebrities who played in her games. These moments are fleeting due to fast-paced monologue delivered in a phenomenally aloof manner by Chastain.

But Chastain isn’t alone. She is supported by great actors in great roles. Michael Cera plays a nefarious Hollywood star, anonymously identified as Player X who gets far too little screen time, less than I would have liked. Idris Elba serves as her lawyer and is a great scene partner, and there’s a surprising performance by Kevin Costner as Molly’s father, who provides emotional depth to her character. It’s the scenes with Costner and Chastain that resonate with me days after viewing.  All these men provide different yet stable performances that help relieve the pressure on Chastain’s shoulders from time to time.

Aaron Sorkin has a specific way of storytelling. He’s interested in real stories about real people, but they are not biopics. They are about little moments in people’s lives that tell a larger story: from Mark Zuckerberg in a legal dispute to Steve Jobs launching products and now Molly Bloom trying to hustle her way out of a prison sentence while keeping her conscience clean. These are three real people in three very specific circumstances. But somewhere in these very public, very particular events he finds a way to tell this person’s story and show their truth by exposing their flaws. With Zuckerberg, it was his desire to be accepted. For Jobs, it was his inability to love his daughter. And for Molly, it was her relationship with her father. He shows the private lives of these public figures and makes them universal, allowing an average audience member to connect and identify with them. The result is a very intimate experience which I believe to be storytelling at its best.