Hampton-Bey and UMass women’s basketball look to get back to .500 record Wednesday at Davidson. 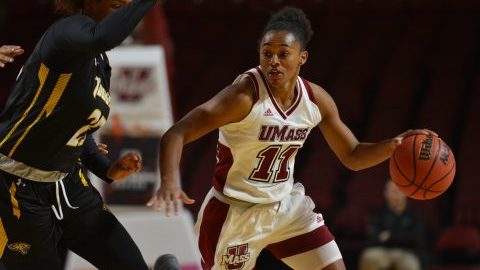 The Massachusetts women’s basketball team will head to North Carolina on Wednesday to take on Davidson. While the Minutewomen came out on top in last year’s matchup against Davidson, UMass knows that grabbing the road win will be no easy feat.

“They’re really good defensively; they can score,” UMass coach Tory Verdi said. “Their post players and guards can all shoot the ball. It’s going to be a tough game for us.”

From the interior, Davidson’s Justine Lyon and Mackenzie Latt lead the Wildcats with 15.4 and 13.2 points respectively. Davidson’s primary outside shooting threat comes from freshman guard Katie Turner, who is shooting a very strong 41 percent from behind the 3-point arc this season.

The defensive efforts of Minutewomen (9-10, 1-5 A-10) senior forward Maggie Mulligan and freshman guard Bre Hampton-Bey will play a major role in shutting down these scoring threats. Hampton-Bey, who sits in second in steals per game in the A-10, will look to keep up her hot play of late.

“They have some really good shooters that we just have to contain,” Hampton-Bey said. “We’ve really done a lot better on the defensive side as the season has gone along.”

Coming off a career high 31-point, nine assist, four steal game in the win versus Virginia Commonwealth University, earning her the A-10 Rookie of the Week award, Hampton-Bey is locked in and confident headed to North Carolina.

“Bre is coming into her own,” Verdi said. “She’s gaining some confidence. She’s our catalyst and she really makes us go. She has the ability to score for us and lead us, and that’s what we need.”

Though the UMass team has only mustered up two away wins this season, Hampton-Bey doesn’t think that’s a cause for concern either.

“We don’t really worry about the environment, we just worry about staying focused on our team and working on personnel,” Hampton-Bey said “We’re just trying to stay locked in and focused, so we can be ready when we play.”

Coming off their first conference win of the season against VCU on Sunday, the Minutewomen will look to keep their confidence rolling on the road.

“We just got to take that confidence and momentum on the road,” Verdi said. “We’ve had a tough non-conference schedule. Especially having a young team – which we have – there’s a lot of lessons to be learned and it certainly hasn’t been easy, but I like the way we’re playing.”

Though the Minutewomen have only won a single conference game this season, they have remained competitive in almost all of them. The UMass team has lost three of their five A-10 games by five points or less to tough, more experienced A-10 opponents, such as Duquesne, Saint Joseph’s and Saint Louis. The youthful Minutewomen team looks to be trending upward.

The Minutewomen sit with the same record through 19 games as they did last season at 9-10. However, the UMass team will be looking to finish the season off much better than last year, which ended on an 11-game losing skid, finishing their 2016-17 season at 9-21. However, with improved bench depth and increased experience, the Minutewomen should help be able to finish off this season on a better note than last year.

Tipoff is scheduled for 7 p.m. in North Carolina on Wednesday.