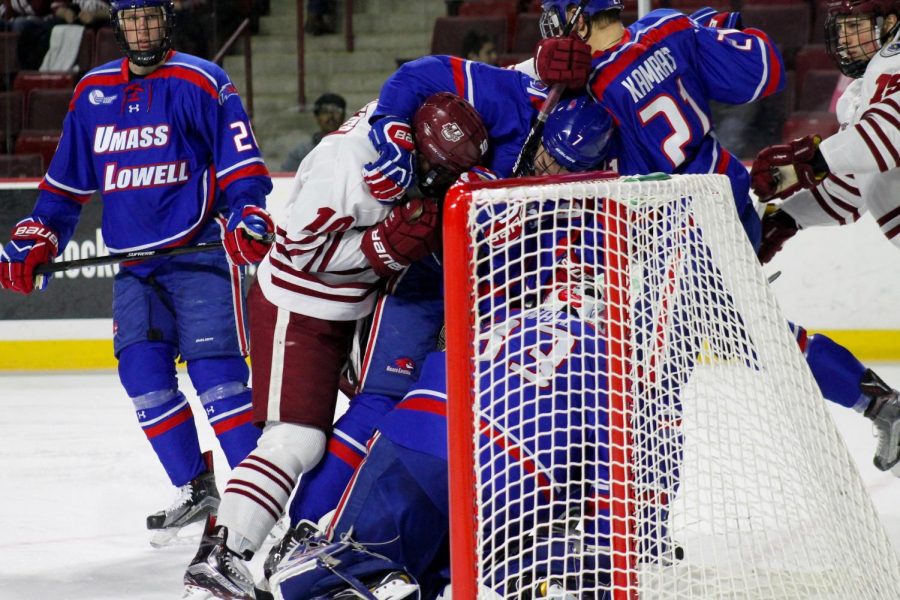 Redshirt freshman Chris Schutz snuck the deciding goal past Eagle netminder Joseph Woll at 6:30 of the third period to claim the win.

UML is making the most of conference play as they have won nine of their last 11 in Hockey East. The River Hawks currently share fourth place with Boston University in the HE standings.

After a scoreless first, UML owned the second period, scoring the first two goals of the game. Ryan Collins and Ryan Dmowski were credited with the goals, giving the River Hawks a comfortable 2-0 lead over BC.

The Eagles mounted a comeback, scoring two goals early in the third, with Graham McPhee tallying both markers.

His first goal came on the powerplay as he poked in a loose puck that sat in front of the goal line. McPhee struck again three minutes later, only this time rifling a wrist shot from the inner faceoff circle.

The River Hawks split the series as they were defeated 5-2 Saturday night in Chestnut Hill. They will host the AIC Yellow Jackets Tuesday, Feb. 6.

Karashik, a Connecticut native, opened the scoring midway through the first giving the Huskies an early 1-0 lead. Karashik’s game-winner doubled his total to four on the season.

Since joining Hockey East in the 2014-15 season, UConn holds the edge over UNH in head-to-head play with a 6-4 record. The Huskies have won six straight against the Wildcats.

When Karashik wasn’t scoring for UConn, it was Wyatt Newpower who stepped up, scoring a power play goal 2:35 into the second period. Newpower scooped up a blocked shot in front of the net and proceeded to convert it into his second goal of the season.

The Wildcats notched a pair of goals in the first and third periods, but it wasn’t enough as they lost the series and were swept by the Huskies this season.

Sophomore Ross Colton came up big for the Catamounts scoring the overtime game-winner off a redirect Saturday night in North Andover to give UVM the dramatic 2-1 win.

With the loss, Merrimack extended its losing streak to four games.

The scoring started on the Merrimack power play as Warrior senior Jake Hennig pounced on a loose puck. Hennig’s first period goal would earn him his 36th career goal and would tie him for most goals on the team, with nine.

The Catamounts would match the Warriors, scoring at 10:59 in the second after Alex Esposito scavenged the puck from behind the net and fed it to Matt Alvaro for the one-time score. It was Alvaro’s third goal of the season.

With less than a month to go in Hockey East Conference play, both Vermont and Merrimack are in a power struggle for more wins to receive home ice advantage.

Both Vermont and Merrimack goalies, Stefanos Lekkas and Craig Pantano, each recorded 27 saves on the night.

Vermont will host the No. 8 ranked Providence on Friday, Feb. 2 from Gutterson Fieldhouse.

Ryan Beaton can be reached at [email protected] or on Twitter @ry_beaton.