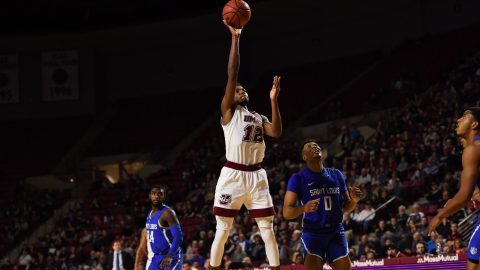 Carl Pierre sat quietly at his locker, upset at over what had just transpired. The Massachusetts men’s basketball team had just finished a game vs. Saint Louis, but it was as if the Minutemen didn’t show up to play.

UMass put up a season low 47 points, though Pierre had 13 points (second most for the Minutemen). Pierre knew that he, and his team, should have done better in the game on Jan. 20.

Postgame, UMass coach Matt McCall chalked the loss up to poor “disposition” from his team.

As McCall put it, the Minutemen got “ambushed.”

UMass doesn’t have time to dwell on the Billikens. In league play, games come fast and the Minutemen are already on to La Salle, having left Tuesday morning.

Before it could get its one and only practice in before traveling to Philadelphia, the coaches held a film session, like they do after every game.

In that film session, McCall said something that stuck with the freshman guard.

Pierre has acknowledged the obvious: Mass is shorthanded with only seven scholarship players. However, he never really thought about the difference in talent between the Minutemen and their opponents.

Monday afternoon was the Minutemen’s only practice on campus before hitting the road; Pierre thought the team competed much harder than they had before their contest with the Billikens.

“We rank in the bottom half of the country in a lot of offensive categories,” McCall said. “Other teams have more, they have more, that doesn’t mean we can’t overcome that with the right mentality and there have been times where we’ve had the right mentality and have overcome it. Georgia had more, Providence had more, Dayton had more, we went to Dayton with seven guys, they had more. But your competitive spirit overcame that and we didn’t have that on Saturday so today was a little bit of a physical practice to say the least and we’ll practice the same way tomorrow.”

The Minutemen will be playing La Salle, a team that has had tough stretch in league play, currently sitting at 2-5 in the Atlantic 10. But, being the second time that the Minutemen will be facing the Explorers, UMass has a better understanding of what they’ll be up against.

“Definitely after beating them the first time, they definitely—especially us coming to their play—they don’t want to lose to us again,” Pierre said. “And I think that’s what it’s going to be, they’re just going to be hungry to beat us.”

When the two teams faced each other on Jan. 10, they needed an overtime period to determine a winner. Pierre exploded for 25 points but was overshadowed by Luwane Pipkins’ 44 points.

Back-to-back bad losses to Rhode Island and SLU have the Minutemen in a little slide that could become even bigger if not corrected quickly. Following games against La Salle (8-12, 2-5 A-10) on Wednesday and Fordham (6-13, 1-6 A-10) on Saturday, the Minutemen have rematches with URI and Dayton.

Despite all that has transpired in the past week and the daunting schedule that lies ahead, Pierre remains calm.