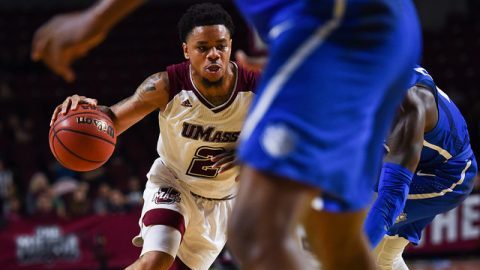 The last time the Massachusetts men’s basketball team faced off with La Salle, it needed a 21-point second half comeback to earn a victory. UMass was faced with a similar situation Wednesday night in Philadelphia, falling behind by more than 20 points in the final half of play, but didn’t have a miracle in it this time, falling 87-72 to the Explorers.

La Salle was once again playing without one of its star players against the Minutemen, as forward B.J. Johnson missed the first meeting and guard Pookie Powell didn’t suit up Wednesday. Johnson made up for missing the last game, finishing with a game-high 26 points. Amar Stukes added 22 for the Explorers.

Luwane Pipkins, who broke the UMass single-game scoring record against La Salle a few weeks ago, finished with 25 points on six threes. Carl Pierre and Malik Hines were the only other Minutemen in double figures, scoring 11 each.

UMass has been plagued with slow starts all season long and Wednesday was no different as the Explorers held a 10-point lead just over 10 minutes into the game.

La Salle proceeded to go on a 17-2 run to end the half, taking a 20-point lead into the halftime intermission.

Minutemen coach Matt McCall was not pleased with his team’s effort level to start the game.

“To start the game just physically we got dominated,” McCall said on WEEI radio after the game. “All we talked about yesterday, we wanted to front the post and make everything going into the post tough to catch. The first play of the game, we don’t front the post. You have to compete, and competition brings out the best or worst in you. You’ve got to want to compete. In between the lines, whether you’re playing one minute, 20 minutes, 40 minutes, it doesn’t matter.

“I was concerned at the half about our team quitting,” McCall added. “They didn’t do that. Unless we play the game connected with an enormous amount of passion, will to win, don’t question what the coach is asking you to do, we’re average at best and we’re not going to win very many basketball games.”

While UMass may have competed harder in the second half, the scoreboard didn’t show it. The Explorers maintained their 20-point lead for the majority of the half, extending it to as much as 30 with 13:09 to play. The Minutemen went on a small run to end the game to make the score more respectable than it was.

The loss is the third straight for UMass, and none of them have been pretty. The Minutemen were dominated by URI, one of the best teams in the conference, falling by 22. Saint Louis came into the Mullins Center on Saturday and controlled the game the whole way through to defeat UMass by 19.

The Minutemen are entering every game at a disadvantage with only seven players on scholarship after center Rashaan Holloway was suspended for the remainder of the season due to academics. This forces the starters to play extended minutes, and the wear and tear of playing over 30 minutes a night may be catching up with UMass.

Even with the lower numbers, McCall will not allow his team to make excuses or feel sorry for themselves.

The Minutemen look to get back in the win column Saturday, as they travel to New York to take on Fordham. Tipoff is scheduled for 2 p.m.