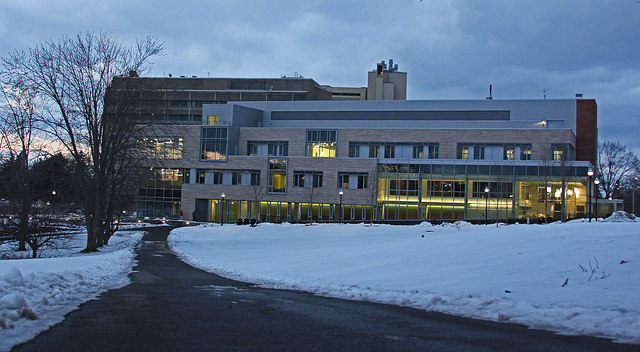 University of Massachusetts journalism professor Shaheen Pasha was recently selected to be one of nine journalists part of the 2018 Knight Visiting Nieman Fellowship. Throughout the rest of the year, she will be conducting research on how university journalism programs can partner with prisons to create journalism curriculums to support prison inmates, according to the Nieman Foundation. The decision was announced on Jan. 18 by the foundation.

Located at Harvard University, the Knight Visiting Nieman Fellowship is a short-term research opportunity geared toward journalists who aim to conduct new research to advance the field of journalism.

For Pasha, the inspiration for her research project wasn’t new; it’s been a small part of a consistent theme throughout her entire life: social justice.

Growing up in an immigrant family from Pakistan in the rougher parts of Brooklyn, New York, wasn’t easy for Pasha as she was constantly reminded of the economic disadvantages that surrounded her. The middle school she attended, Intermediate School 364, was built under a parking garage filled with mice and heavy fumes.

But rodents and terrible odors weren’t the biggest misfortunes at I.S. 364. During her time there, Pasha saw many of her classmates end up getting pregnant as young as 14, sent to jail or even killed.

“I grew up in a very diverse area where there were lots of people that were forgotten about,” Pasha said.

After graduating from I.S. 364, Pasha went to Brooklyn Technical High School, a school she admits was a major step-up from her middle school. It was there she met another Pakistani-American high-schooler, who ended up being a good friend of hers.

Decades later in 2005, Pasha landed a job as a legal reporter for CNN Money, where she primarily focused her work on white-collar crime. Her most famous story was on the 2001 Enron Scandal, which detailed the financial bankruptcy of one of the largest multi-billion-dollar energy corporations in America.

However, it wasn’t until one year later when Pasha found out her longtime friend she met in high school was being sent to jail for murder that she began to really think about crime and wealth in America.

According to Pasha, it didn’t make a lot of sense that rich billionaires and CEOs being charged with heinous crimes were immediately being forgiven; meanwhile, people, such as her friend, were shunned away from the rest of society.

In 2013, upon joining the UMass Journalism Department, Pasha decided to volunteer at the Hampshire County Jail and House of Corrections in Northampton, teaching media writing. It was there Pasha began to find her passion in bringing the art of journalism to prison inmates.

“There were so many of them [students] that stuck out to me while teaching there. They were all so smart and so professional,” Pasha said.

Soon after, Pasha’s colleague Razvan Sibii sought to join her in volunteering at Hampshire County. Sibii said this was always something he wanted to do, and after the two spent two summers volunteering together, they shortly teamed up to teach a brand-new course in the journalism department: “Social Justice Journalism.”

“I couldn’t have wished for a better partner in that kind of work than her. She is capable, smart and kind to students and is reliable, and I couldn’t have done any part of that class without her help,” Sibii said. “That class would have not gone anywhere without the true amount of effort she put into it.”

Former student of Pasha, Talya Sagoba, joined in on the accolades, saying, “She’s a really amazing professor. She’s super passionate and invested in what she does, but she’s also super down to earth. I would say she’s kind of like a cool mom.”

Pasha then decided to apply to the 2018 Knight Visiting Niemen Fellowship. Her idea: to create a universal curriculum colleges and universities across America can use to bring journalism programs to prisons.

“Right now, I am looking at other places that are already doing the type of work I am interested in like the San Quentin Newspaper,” Pasha said.

San Quentin News is a multi-award-winning publication written by prison inmates in the San Quentin prison in California. According to Pasha, graduate students from the University of California Berkley help edit and assist the inmates in their reporting.

Pasha plans to take her research to New York and Massachusetts, working with journalism professors who have also delved into the field of prison education.