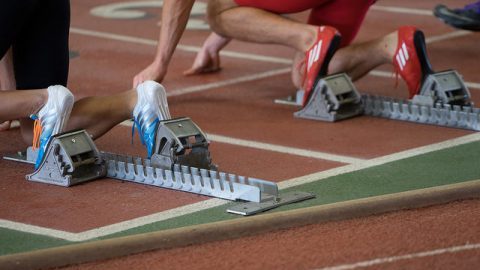 The Massachusetts women’s track and field team took to Harvard’s Gordon Indoor Track this past weekend for the two-day Beantown Invitational, and left with multiple school records in hand.

Freshman Danielle Notarfrancesco walked away with the program’s best-ever mark in the shot put, after coming up inches short of the record last week at the Dartmouth Invitational. Notarfrancesco’s opening toss sailed a hair over 48 feet, edging out the previous record by three inches.

Notarfrancesco said after the event that she felt like she had more left in the tank, and that small technical work could improve her marks. She also cited UMass’ throwing coach, John Napolitano, as a major reason for her success. UMass coach Julie LaFreniere also mentioned the expertise that Napolitano has added to the program.

The Minutewomen also found a new school record in the pentathlon, set by redshirt junior Bridget Deveau, who took first in four out of the five events, and knocked off a 19-year-old record in the process.

Deveau, who broke the record by by 162 points, said that she knew the mark was a possibility going into the meet. “I PR’ed in a couple events but still felt that there was room for improvement,” she added.

The final meet tally had the Minutewomen in fifth place with 64.5 points, while Northeastern took the win 117 points. The team enjoyed individual success from Ivana Nyemeck, who won the triple jump in 39 feet, 2.5 inches, and senior Colleen Sands in the mile, whose time of 5:05 landed her third place.

On the men’s side, UMass was led by junior Nathan Adeyemi’s first place in the triple jump at 47 feet, 5 inches, and fifth place in the long jump, at 21 feet, 9.5 inches. Adeyemi’s triple jump was enough to qualify him for the IC4A Championship during postseason competition.

Junior Jonathan Collins also came through for the Minutemen in the heptathlon, where his score of 4,823 was good enough for a personal best, a second place finish, and third all-time in the UMass record book.

UMass also saw second places from Jake DeGrace in the 60 meter hurdles and junior Brian Gendron in the 1000 meters.

Both the men and women will now have less than a week to prepare for their next meet, the Joe Donahue Indoor Games at the Reggie Lewis Center in Boston.

Will Katcher is can be reached at [email protected] and followed on Twitter at @will_katcher.