UMass siblings finally have the opportunity to play side-by-side 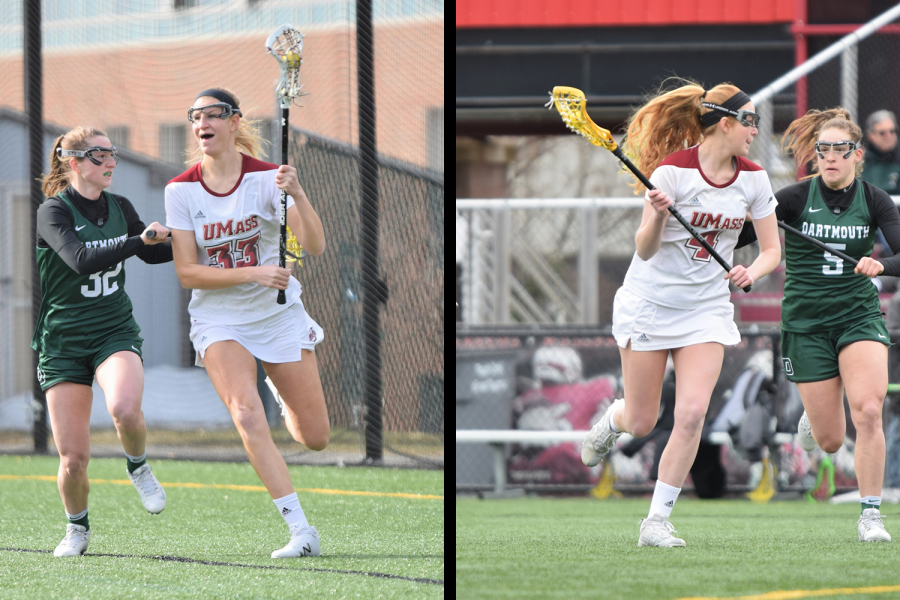 This Saturday marked the beginning of a season bursting with high hopes for the Massachusetts women’s lacrosse team. While Dartmouth gave the Minutewomen a tough match, UMass was able to breath easy after a 17-13 victory.

Two players were especially exuberant after the home-opener though, because the game marked something uniquely special for them. Kiley and Brinley Anderson — two sisters from Killingworth, Connecticut — were kept from playing the game they love together in high school as a result of age differences and injury. Their only opportunity to join forces was in Kiley Anderson’s final season and Brinley Anderson’s first.

Unfortunately, injuries kept Kiley Anderson off the lacrosse field for the entire season and she would sign to play lacrosse at Boston College.

The dream started to come together after Kiley Anderson transferred from Boston College to UMass. Around that time, Brinley Anderson was in the middle of her recruiting process out of high school.

Once Kiley Anderson made the move to Amherst, it was an easy decision for Brinley Anderson to choose to play for the Minutewomen. This spring is the first season that the Anderson siblings have stepped off the practice field and into the game together, and they are thrilled about every second of it.

“Playing collegiate lacrosse together is something that we only dreamed about, and it’s so surreal that the season is here and we’re both out there together,” Kiley Anderson said.

The love of lacrosse allows these sisters to bond, but it also drives them to compete together at the highest level of the game. The sisters took their special day to showcase their talents against the Big Green.

Brinley Anderson scored her first career college goal after just two and a half minutes of play. She was relieved to get that first goal off her shoulder and enjoyed the moment.

“We knew Dartmouth packed the zone in the middle so we were trying to stay high,” Brinley Anderson said. “Then we got that skip pass over the top and I just ripped it, dodged and hit it low. It felt really good to score.”

Kiley Anderson would open her season with four goals and one assist.

“I would say that the way I play is to think two or three plays ahead,” Kiley Anderson said. “Today, I put myself in a position where I was open. The rest was up to my teammates, and they converted. They found me open and I was able to finish.”

Both sisters have their eyes set on bringing a 10th straight Atlantic 10 banner to UMass while continuing to enjoy being out on the field with each other.

“On top of the end goal of winning the A-10 Championship, I think I am looking forward to just playing lacrosse every day,” Brinley Anderson said. “We’re out there four or five hours a day playing. Just being together and getting better together is what I’m most excited for.”