Why are Super Bowl riots acceptable? 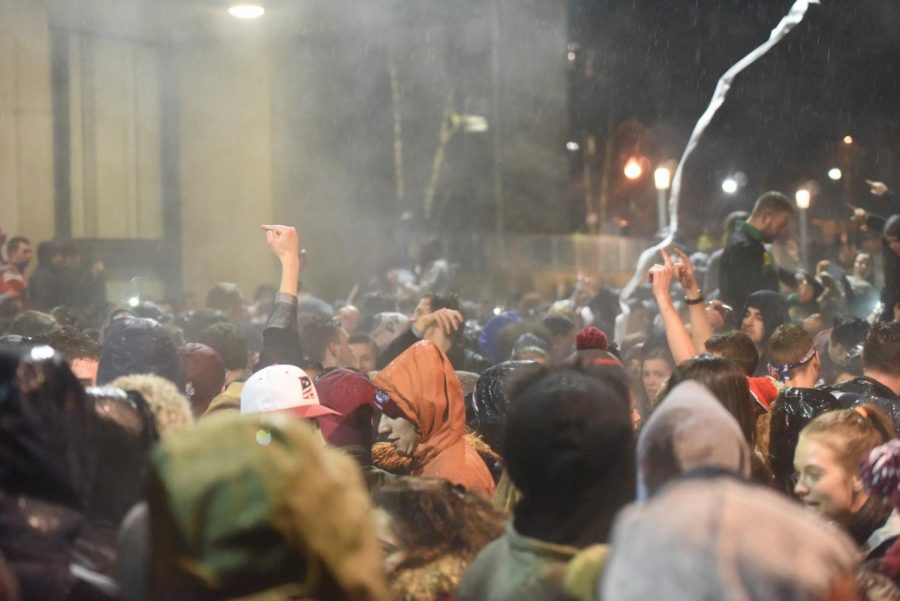 I had never watched a full football game before Feb. 4, when I watched the entire Super Bowl. I wore a New England Patriots shirt and cheered with my friends when the Pats scored a touchdown, and I laughed and encouraged the banter that was going on as I sat down the hall from my room. It was fun for me to be a part of such a tradition because the room was filled with good vibes…until the Patriots lost.

The room fell silent as everyone grew angry — I could feel the tension rising and it made me uncomfortable. Immediately after I walked out of the room, I witnessed a Patriots fan put his neighbor, an Eagles fan, against the wall. Neighbor turned against neighbor in a heartbeat just because they were supporting opposing teams. I hadn’t even walked two feet before a girl told the boy who had just been pushed onto the wall to “shut the f*** up.” I couldn’t help but tell her to watch her mouth. He might have had an Eagles sweatshirt on and I might have had a Patriots shirt on, but he was my neighbor and I would not let someone disrespect him in such a way over a game.

It was then that I realized what was really going on: Students felt entitled to be disrespectful and dangerous because their football team lost. Students felt that they could push the limits of safety and civility because their favorite team lost a game. That was when I saw just how their actions spoke of their privilege — as did mine.

I turned around to see someone come out of a room, their hand leaking blood on the hallway floor. My hand instinctively reached for my phone to record the situation: I had to show everyone on Snapchat — they wouldn’t believe it. Instead of trying to help or remove myself from the situation, I added to the spectacle by posting it all over the web.

That seemed to be a common reaction that night. There were videos and photos of students destroying their own property and property of the University of Massachusetts all over. A bathroom stall was destroyed, the door resting on the shattered toilet and the photo went viral. Aside from thinking it was insane, I also wondered, “Who’s going to clean that up?” It is highly unlikely that the student who broke the stall would be asked to clean it (even if they were held responsible for the cost of the damage). Ultimately, if the student doesn’t have to pay, I don’t really care if the University has to use some of their money to fix that toilet, but our maintenance workers are not our servants, and they are not here to clean up our outrageous messes. And yet, our maintenance team would be the ones cleaning up after the students who threw a collective tantrum because their team lost.

What happens when Colin Kaepernick takes a knee during the national anthem? He’s associated with terrorism. What happens when UMass riots after the Super Bowl? An opinion article is published claiming that rioting is a culture that brings our student body together, and the police politely say, “We understand that the Patriots lost, but please go inside.”

I watched from afar as people yelled, “Police brutality!” when an officer arrested a belligerent student who had just started a fight. But that’s not police brutality; what happened to Freddie Gray is police brutality. If anything, the lack of force employed by the officers is what surprised me: Rubber bullets and tear gas were the most extreme measures that the police used.

Restraining and handcuffing someone who is physically violent and belligerently drunk is not police brutality, and you are privileged if you think it is. The last thing the police were on the night of the Super Bowl was brutal. No one was called a terrorist like Black Lives Matter protesters are, even though students were terrorizing their own campus. No one was killed. Rioting because the Patriots lost was considered socially acceptable. I just wish this privilege was extended to protesters who are fighting for something important.

In the Feb. 5 opinion article, “Sports gatherings bring students together,” the author argues that rioting is essential for UMass culture. However, the article was entirely based around the idea that rioting brings people together, and that is not how I see it at all. Amidst the riots after the Super Bowl, a video was posted of a white male student yelling racial slurs out of a window at a Black student because he was an Eagles fan. This video showed me that this was not a united group and this riot wasn’t bringing anyone together — it was turning people against each other and causing destruction, all because the Patriots lost a game.

Seeing my videos on social media, my friends from home kept texting me one question: “What is this privilege?”