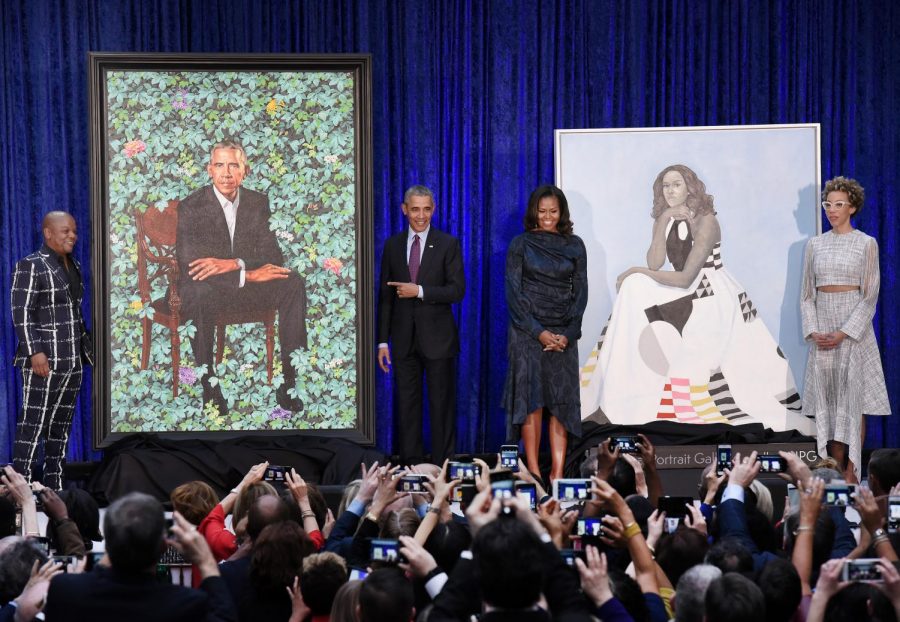 There is nothing wrong with critiquing what our society considers nontraditional, so long as the criticism has merit. Kehinde Wiley’s portrait of President Barack Obama and Amy Sherald’s portrayal of First Lady Michelle Obama do exactly that. They stand out among the other portraits which line the walls at the National Portrait Gallery in Washington. However, some of the critiques applied to these recent portraits go beyond the scope of legitimate criticism.

Many on Facebook have shared photographs of other presidential portraits. They include President Obama’s portrait in their image in order to suggest how the difference speaks for itself. But these photos are shared as if a blatant mistake was made by either the Obamas, who had free rein when choosing their artists, or the artists themselves for creating the artwork that they did. The problem isn’t the inherent difference between the other 42 presidential portraits and this one, but rather how we choose to interpret that difference.

The Washington Post’s Feb. 12 article on the subject included the headline, “The Obamas’ portraits are not what you’d expect, and that’s why they’re great.” Such a header begs the question: What was expected in the first place? Was this the Washington Post’s way of saying that the expectation was some adherence to tradition? The problem with this kind of rhetoric is that it is hard to explain without illuminating or simply acknowledging implicit biases held by many in our society. If this painting breaks with tradition, then was Obama’s presidency explicitly nontraditional, or was his traditional presidency represented in a nontraditional way?  It is worth noting that tradition is nothing more than a social construct, consistent with historical custom or behavior, that is worshipped as the gold standard for a significant period of time. Tradition is generational not because it is right but because it creates continuity amongst generations. This continuity makes these customs comfortable. Therefore, breaking the custom is often understood to be uncomfortable, often carrying with it unfair criticism.

Wiley, the painter of Obama’s presidential portrait, creates works that are artistically provocative, incorporating bold colors and stark patterns that differ from what many consider traditional norms. As written about in the New York Post following the unveiling, Wiley’s work incorporates classical artistic references. While there is no dispute regarding Wiley’s provocative approach to his subjects, one of which includes “two versions of the biblical Judith holding the severed head of Holofernes,” these nontraditional works of art are born out of a classical style.

Perhaps the criticism of these works is not so much traditional but predictable. If the thinking stems from Obama’s presidency being objectively different because of his skin color in relation to the previous 42 white men who have held the position, then it only makes sense that artistic representation would lend itself to similar thinking. The same could be said of Sherald’s portrait of Michelle Obama.

Sherald is known for using grayscale in her work. This is rather evident in her portrayal of the former first lady, with some critics going so far as to deem the portrait as inaccurate. On Twitter, Eugene Gu, MD said, “Michelle Obama is an elegant lady and the portrait looks nice. But clearly the artist drew someone else.” It remains a mystery who Gu thought was the intended subject. Does his opinion deserve more respect because he acknowledges Michelle Obama’s elegance in the tweet along with the professional events of the work? Or does his arrogance come across as embarrassing? I would think the latter. Furthermore, what is he suggesting in concluding that Sherald drew someone else? Does it not look like Michelle Obama because it is nontraditional? While Gu’s tweet did not explicitly outline that, his opinion stands in stark contrast to Michelle Obama’s thoughts on the work.

She displayed in her own words the power that this portrait possesses: “This is all a bit overwhelming, especially when I think about all the young people who will visit the National Portrait Gallery and see this, including so many young girls of color who don’t often see their images displayed in beautiful iconic ways.” As previously mentioned, the former president and first lady sought out these artists to create their portraits. Both are up on display at the National Portrait Gallery. It is worth noting that Wiley and Sherald are the first Black artists commissioned to paint presidential portraits.

It is one thing to not like the work itself. There is nothing wrong with that. But it is unfair to criticize something by comparing it to the supposed traditional successes of past presidential portraits. Clash America’s criticism of the piece, citing the lack of realistic representation regarding Obama’s portrait, is based on the false assumption that he is depicted as having a Napoleon complex. It’s curious that such conservative criticism can’t be found in some of the other artistic representations of other presidential portraits. It’s as if to suggest that Gilbert Stuart’s portrayal of President George Washington doesn’t represent him with his own Napoleon complex, stretching out his hand, yielding to the masses and hailing to the throne of democracy. We should critique culture regardless of whether or not it holds up tradition, and it should be done in a way that advances the conversation. But let us not criticize breaking with tradition when what we really mean is breaking with whiteness.