Minutemen have allowed the first goal in all six games they’ve lost over this losing stretch. 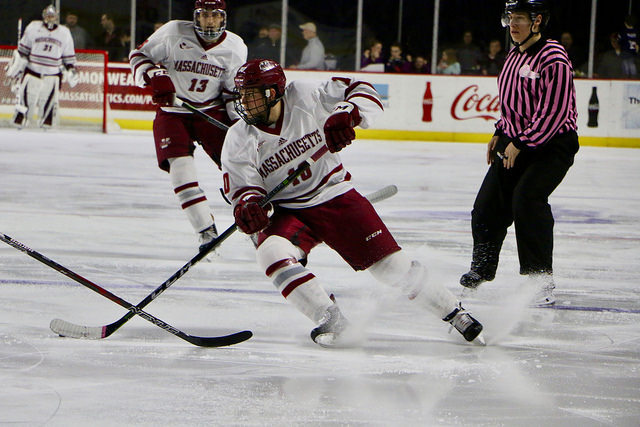 On Jan. 19 the Massachusetts hockey team won its biggest game of the season with a 3-0 victory over No. 8 Northeastern.

Since then, UMass has failed to pick up a subsequent win and the outlook of the season has shifted dramatically, as the Minutemen dropped their sixth straight in their 3-1 loss to New Hampshire Saturday.

Already leading 1-0, the Wildcats scored the decider at 17:43 of the first period when Kohei Sato swept the puck past sophomore Ryan Wischow to take a 2-0 advantage.

UMass (11-16-1, 5-12-1 Hockey East Association) lit the lamp when freshman Mitchell Chaffee scored his 11th goal of the season a little over halfway through the second period, but the Minutemen couldn’t fool UNH (10-13-5, 5-9-4 Hockey East) goalie Danny Tirone (26 saves) again over the course of the contest.

The Wildcats added their insurance marker on a power play tally from Marcus Vela, following a five-minute major and game misconduct penalty on freshman Jake Gaudet, to seal UNH’s first victory since Dec. 6.

During this slide, UMass has allowed the first goal in each of its losses and the trend continued Saturday when Liam Blackburn gave UNH an early 1-0 lead after batting in a bouncing puck on the man-advantage.

“It’s getting pretty ridiculous that the first scoring chance the opposition gets, they score almost every time,” Minutemen coach Greg Carvel said. “That falls on our goaltenders.”

Wischow didn’t necessarily play poorly against the Wildcats, making 14 saves, but the Green Bay native also couldn’t steal the game for UMass to end the skid.

“That or we have to score more than two goals,” Carvel said on whether it’ll take an incredible performance from either of his goalies to halt the losing streak. “The issue is we have a hard time getting around the other team’s net. I’m trying to figure out if it’s a byproduct of a young team or if guys aren’t buying in to the system.”

The Minutemen had another potential goal overturned late in the third period on a play that was determined as goalie interference. UMass freshman Marco Bozzo fell over Tirone and Chaffee smashed the loose puck into the empty cage, but the referees ruled that Bozzo tripped on his own and hindered Tirone from stopping the puck.

Familiar suspects were responsible for the offensive presence as Chaffee’s goal counts as his third point in three games, while Oliver Chau, who set up Chaffee with a neat backhand dish, earned his 21st point of the season to stay atop the Minutemen’s point list. Cale Makar was awarded the secondary assist on Chaffee’s goal to push his point total to 15 in 23 games.

UMass outshot UNH 27-17, however the Wildcats notched two goals on five power play chances while the Minutemen went 0-for-3 on the man-advantage.

“Tonight was a game we needed to win. We really need to win a game at this point,” Carvel said. “The margin is goaltending and finding a way to score goals.”

UMass returns home to the Mullins Center for a Tuesday night matchup against Merrimack, with puck drop tabbed for 7 p.m.