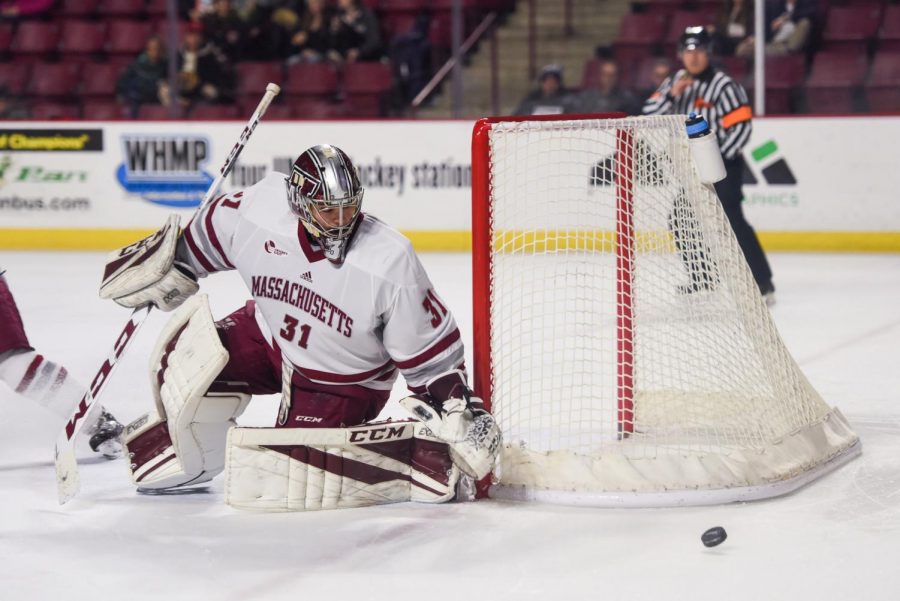 Throughout the 11-team Hockey East Association, 10 different goalies have played the bulk of the minutes in net for their respective teams.

Each one has secured the starting job and has been entrusted with playing most, if not all, of the remaining games on the schedule.

With about one month remaining in the regular season, the Massachusetts hockey team is still waiting for one of their two netminders to take over the crease for good.

“We’re still waiting for one of them to lead the way and own the net,” UMass coach Greg Carvel said. “I don’t think the games this weekend changed much.”

The Minutemen, losers of four straight, lost twice to Maine Jan. 26 and 27, with freshman Matt Murray and sophomore Ryan Wischow each sharing the UMass cage.

Back in late November, Wischow was one of the hottest goalies in the Hockey East as the Green Bay native won four consecutive starts, beating Providence and Connecticut and sweeping Quinnipiac, ushering the Minutemen to their best stretch of the season.

Now in desperate need of a goalie to take the torch, Wischow feels the responsibility of rediscovering his game for UMass.

“Before Christmas obviously I was playing really well. You try to go back to that, get back to your roots, what made you successful and obviously never stop working hard,” Wischow said. “The harder you work in practice, that’s something I’ve always had to work on, the harder you work in practice the better you’re going to be in games and the more consistent you’re going to be.”

Sporting a .898 save percentage, a 3.03 goals-against average and a 7-5-0 record, Wischow has the better stats among the Minutemen puck-stoppers.

Goal-scoring hasn’t exactly been a strong suit for UMass during this slide, and both Carvel and Wischow admitted getting suitable goal support will further help the play on the other end of the ice.

“It’d be nice if our guys scored three or more goals for them, which we weren’t able to do,” said Carvel.

“I mean the more we score the more mistakes I technically can make and we can still win,” said Wischow. “It’s more about timely goals than it is anything. But yeah, there’s also timely saves on the other side, a goalie’s got to make a save to keep it 1-1 or something and maybe we get a bounce to go our way. I think it’s a little bit of both right now. The [offense] needs us and we need them, and we got to start helping each other out a little bit more.”

About to enter the most important set of games in its schedule, UMass will need its goaltending play to step up, regardless of who is in between the pipes.