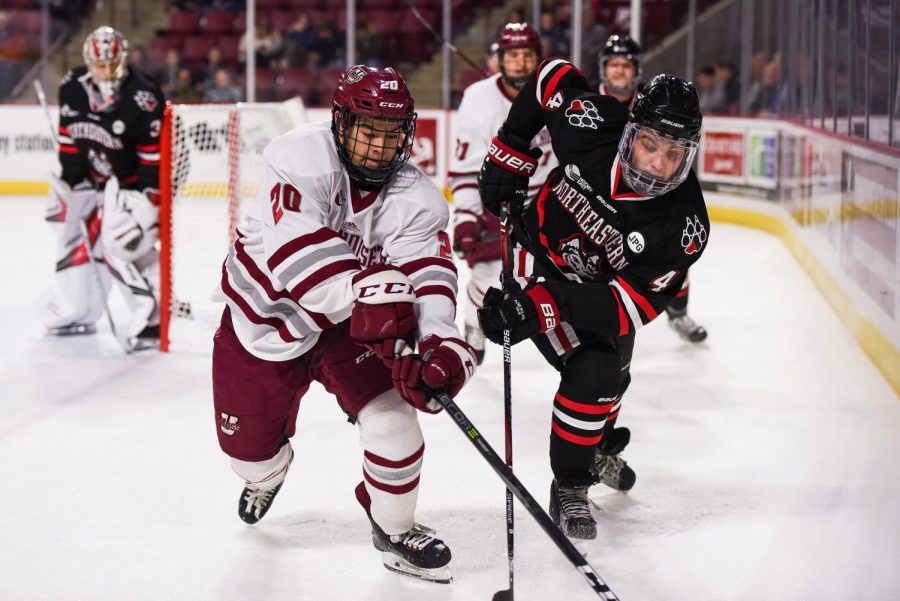 Northeastern captured its first Beanpot title in 30 years Monday night with a blowout 5-2 win over Boston University at TD Garden.

Adam Gaudette, who has the most goals and points in the country, led the way for the Huskies, with a hat trick.

The Terriers, down 3 with just over 4 minutes to play, pulled their goalie and scored with 2:40 remaining in regulation, but it was too little too late, as Northeastern’s Gaudette completed his hat trick and scored an empty netter, clinching the Beanpot for the Huskies.

BU was the first team to score on a fluke own-goal by Northeastern goaltender Cayden Primeau about 13 minutes into the first period, but the huskies quickly bounced back with a highlight reel goal off a beautiful toe drag by captain Nolan Stevens with 5:15 to play in the first. The Huskies took the lead late in the first period after Gaudette put one home off a rebound.

Northeastern is now ranked 3rd in Hockey East and 12th in the country, and the Beanpot champs will look to continue their run of success Friday against Vermont.

Providence holds on to beat Maine in OT

Providence defended home ice against Maine last Friday and came out on top with a 3-2 overtime victory.

The Friars scored first six minutes into the first period. The goal was scored by sophomore Vimal Sukumaran off a great assist from Erik Foley. Maine responded just two minutes later with a goal from sophomore captain Chase Pearson. Providence defenseman Jacob Bryson answered just two minutes after that with a slap shot goal, giving him three goals in his last two games.

The game would remain 2-1 until the Black Bears tied it up with under two minutes to go in the second period with the goal from Ryan Smith.

The 3rd period was scoreless and the teams headed in to OT tied 2-2 until Scott Conway batted a bouncing puck into the back of the goal in overtime, giving the Friars the win.

The Friar’s next game is Friday at home against UMass Lowell, where they look to continue a strong season that sees them ranked 2nd in Hockey East.

Seamus Kelley can be reached at [email protected]