Lack of depth beginning to catch up with UMass 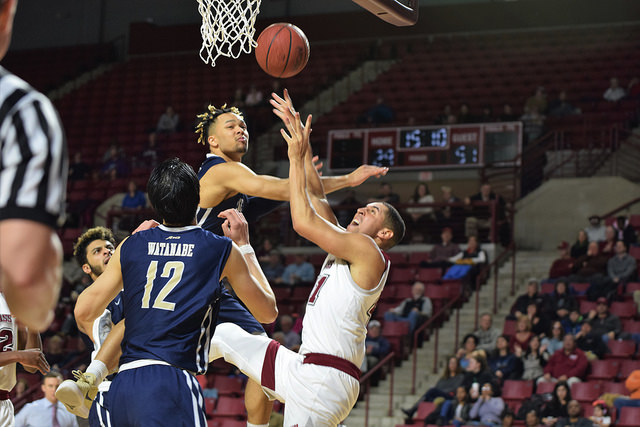 The Massachusetts men’s basketball team is on its last legs.

The Minutemen (11-15, 4-9 Atlantic 10) went into the season with a short bench, having only eight scholarship players on the roster after players transferred out following the firing of then coach Derek Kellogg, and have only lost bodies since.

Rashaan Holloway, who was expected to be a centerpiece of the team, played in just 15 games before being ruled academically ineligible for the remainder of the year. Throw in injuries to Chris Baldwin and Khalea Turner-Morris and UMass is down to just five players on scholarship.

Walk-on Rayshawn Miller has seen significant minutes with the Minutemen throughout the season, yet fellow walk-ons Jaylen Franklin and Mike Gillespie have only entered the game once the outcome has been decided.

UMass is so desperate for bodies that it turned its attention to the football team and got backup quarterback Randall West to walk-on the team one day before they took on George Washington.

West, who has not played competitive basketball since his junior year of high school five years ago, ended up playing seven minutes in the 83-72 loss to the Colonials.

West would finish with one point, rebound and assist, but the sheer fact that he was able to see the court shows how illustrates just how depleted the Minutemen are.

While West still has a long way to go in terms of picking up the offense and defense, UMass coach Matt McCall hopes he can bring energy and toughness to the team.

“We played a football player that hasn’t played basketball since high school,” McCall said. “And he got himself into the game because he played really hard. He gave us some energy and he gave us some toughness. He has no idea what he’s doing out there; he’s been at practice for one day. He’s going to get chucked in more and I’ll live with his mistakes because I know the guy is going hard.

“I just want physicality and toughness,” McCall continued. “We have 1000 things offensively but he only knows two so we have to keep it really simple for him. I just want him to bring energy and passion. That’s all we want as a program and he did that.”

The injuries to Baldwin and Turner-Morris have left UMass with one healthy big man, Malik Hines, and it showed against George Washington as the Minutemen were thoroughly killed on the inside, giving up 17 offensive rebounds that resulted in 21 second chance points.

Conversely, UMass only had eight second chance points and were outscored in the paint 44-26. It didn’t help that Hines finished with four fouls, picking up a quick two in the early minutes of the game, and played only 16 minutes, leaving the Minutemen often playing with five guards on the court, something the Colonials exploited.

“There was 21 second chance points by them in the game, 15 in the first half,” McCall said. “You’re not going to win too many games like that. I didn’t think we had enough competitive spirit, enough fight, enough grit, toughness to get the job done.”

With five games to go before the A-10 tournament, it feels like UMass is hanging on for dear life. When you’re down as many players as they are nights like tonight, where the other team comes in with more energy, will happen.

The players are determined to not let their season end on a sour note, and will not use their lack of depth as an excuse.

“Banged up? Playing over 30 plus minutes a game you could be,” senior C.J. Anderson said. “I know for sure for me, I can speak for myself, I’m a dog. I’m from Memphis, Tennessee. Don’t nothing bother me. I treat everyday the same. Yeah, I may feel like I’m hurting right now but come tomorrow I’ll be ready to go again.”