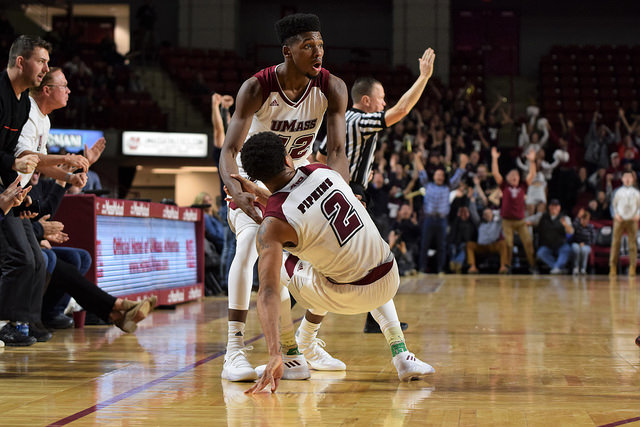 A hot-shooting start was negated by poor defense late for the Massachusetts men’s basketball team, as the Minutemen fell on the road to Saint Joseph’s 85-73.

“I thought obviously in the second half defensively, we really, really struggled,” said UMass coach Matt McCall. “They shot a pretty high percentage there from the field, 47 percent, but I really thought the difference in the game was the free throw line and the free throw discrepancy. We shot four free throws, they shot 20. There were 21 fouls against us and 12 against them.”

Luwane Pipkins and Carl Pierre had 21 points each, but it wasn’t enough, as UMass couldn’t buy a stop down the stretch. Sharpshooting big man Taylor Funk had 22 points for St. Joe’s, while Shavar Newkirk ran the show from the point spot posting 13 points, nine rebounds and seven assists for an all-around strong performance.

McCall threw several different looks at the Hawks defensively, but it made no difference.

“They scored way too much in the second half,” McCall said. “It was man, it was zone, we were trying to switch back and forth. I would’ve liked to get some tempo and some press into the game, but Newkirk does such a terrific job getting the ball up the floor quickly.”

It was an extremely tight contest for the first half hour, with neither team jumping out to large leads or pulling away. The lead changed hands 13 times, and it wasn’t until the final minutes that the Hawks broke things open.

After the teams went to the locker rooms tied at 41, a quick 13-4 run 10 minutes into the second half put St. Joe’s in control for the first time, up 74-65, and UMass never recovered. A handful of chances to cut the lead to something manageable came and went, unclaimed.

“I was proud of our fight,” McCall said. “I didn’t’ think anybody quit, I thought we kept playing and competing, had some opportunities and chances there down the stretch.

“I think when you look down at the stat sheet, we make 14 threes and lose the game, the difference in the game was obviously rebounding, minus nine rebound margin, and to shoot four free throws to their 20, it’s hard to win games like that.”

The major concern for McCall and UMass is the status of Khalea Turner-Morris, who exited the game after taking an elbow to the face in the first half. Turner-Morris did not return, and an already shorthanded team is down another piece.

“He’s going to have to pass concussion protocol, that’s never easy,” McCall said. “There’s a lot of steps that go into that, so I’m not very optimistic about him on Wednesday.”

Saturday’s loss is tough for a UMass team trying to regain its confidence after a recent five-game skid. The Minutemen drop to 12th in the A-10 standings, having lost six of their last seven.

UMass will try and rebound against George Washington on Wednesday.

Amin Touri can be reached at [email protected] or on Twitter @Amin_Touri.