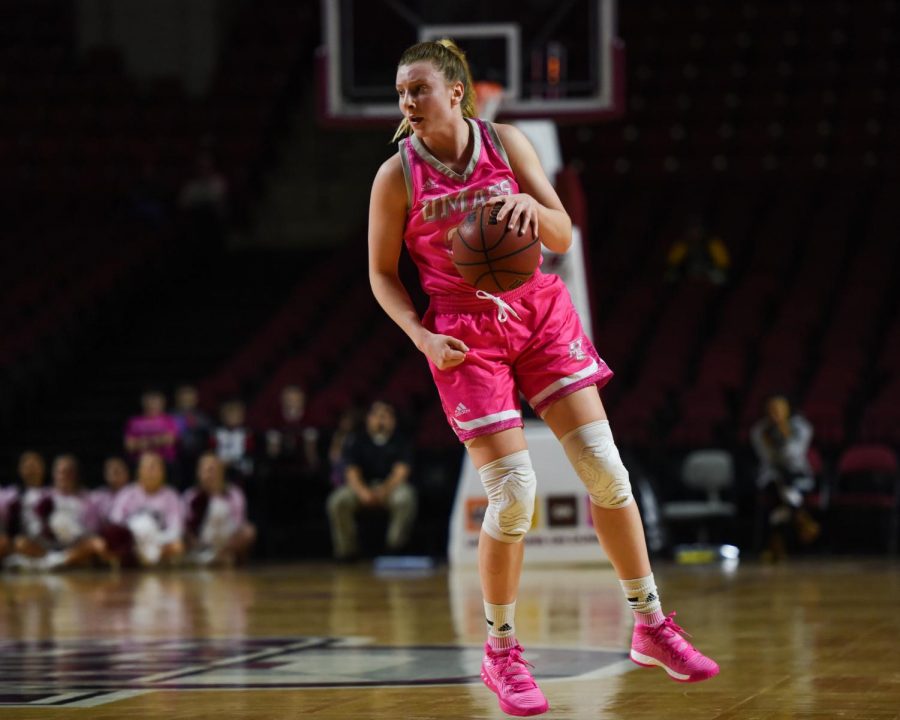 The Massachusetts women’s basketball team will look to keep the ball rolling as they head to Richmond on Wednesday to take on the Spiders (12-15, 7-7 Atlantic 10).

UMass’ (12-15, 4-10 A-10) last game was a hard fought 70-68 victory over Davidson on Saturday in a game that came down to the buzzer. Following a hard-nosed effort where they shot a fiery 10-22 behind the three-point arc, senior forward Leah McDerment knows that they must keep that momentum moving forward if they want to get the win against Richmond.

“It always gives you a little bit of confidence if you shot well in the previous game,” McDerment said. “Coming off such a good home game and meaningful win for us, we’re definitely going to seek revenge and aim to end this season strong.”

Coach Tory Verdi believes part of the successful scoring effort in Saturday’s matchup came as a result of the involvement of the Minutewomen role players.

“Whenever Paige McCormick and [Genesis Rivera] can knock down some threes for us, it just adds some feel to our offense,” Verdi said. “It just opens up so much more if we can hit 3-pointers and open up the driving lanes for us.”

UMass lost 51-39 to the Spiders on Jan. 31. The Minutewomen suffered from their worst offensive output of the season, scoring only 14 points in the first half and shooting a poor 33 percent for the game. Verdi pinpoints this as the reason for the loss.

“That’s the reason we lost the game,” Verdi said. “We held them to 51 points and they didn’t shoot the ball well either, but we did not finish well for whatever reason. We missed a lot of layups, we didn’t finish around the basket well either. We had a lot of good looks and we just got to knock those down.”

Following a performance where the UMass shooting effort seemed as steadfast as ever, the Minutewomen will undoubtedly attempt to carry over the offensive barrage into Wednesday to avoid another disappointing scoring output versus the Spiders.

Verdi believes that part of the biggest challenge of scoring against Richmond is attempting to match their physicality.

“They’re a very physical team,” Verdi said. “They got up into Hailey [Leidel] and didn’t allow her to get any open looks and tried to make her dribble. We need to do a great job in setting screens and executing to knock down shots.”

Matching physicality on the offensive end, as well as the defensive end will be a major key for the Minutewomen in this one.

Richmond guard Micaela Parson sits second in the conference scoring 18 points per game. The Minutewomen are aware that Parson, who scored 14 points in her last game against UMass, can create problems if they do not maintain energy on all aspects of the floor.

“Recently we’ve been trying to maintain the energy on defense to bring our offensive production up,” McDerment said. “We just have to know that we’re going to miss shots and we’re not going to make every shot we take. Obviously in the Richmond game we shot very poor, and that’s not going to happen again.”

As the season winds down, so does the Massachusetts basketball career of McDerment. The senior is only two games away from tying the UMass record in games played and is on pace to break it with the beginning of A-10 tournament play next week.

Senior Maggie Mulligan’s career is also coming to a close with the end of this season as well. It’s almost certain these two will be giving it their all in the final games as they close out their collegiate careers.

Tipoff is at 7 p.m. Wednesday in Richmond.