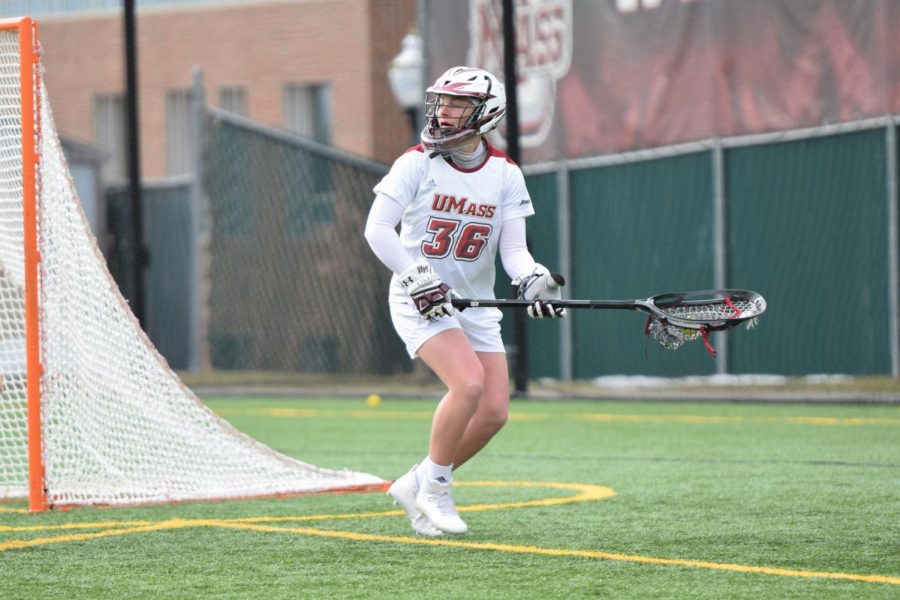 After a successful season opener, the Massachusetts women’s lacrosse team will travel to Newton Wednesday to compete against a daunting opponent, No. 3 ranked Boston College.

The Eagles have opened their season already, claiming three wins right out the gate, and coach Angela McMahon is no stranger to scheduling difficult non-conference opponents early in the season.

After a 16-13 loss to Maryland in the NCAA National Championship, BC is looking to have another strong year and is in good position to make a deep tournament run.

“It’s a great opportunity for us to get better,” McMahon said. “We play to win, and I think we have a lot of players that have really committed to doing whatever it takes—both on the field and off. We’ve been training really hard all season long.”

UMass assistant coach and former Boston College lacrosse player, Zoe Ochoa, who trains specifically with goalies, had much work to do in preparation for her former team.

“I think for a goalie, consistency is really important, so we really didn’t do anything different this week than we did last week,” McMahon said, speaking on the preparation of her goalie. “I think the intensity and energy of the game alone helps the level of play [for goalies]. It’s really [about] making sure she feels confident—confidence is probably the most important thing.”

Minutewomen starting goaltender, Lauren Hiller, played all 60 minutes in the first game of the season against Dartmouth. Hiller, who collected her first win of the season, let in 13 goals while making seven saves.

“[We want to make sure] that she’s having good practices, playing her angles and really communicating with the defense well,” McMahon said. “As a goalie, we don’t want to isolate that position, she’s really part of that defensive unit. Knowing what her role is—for our defense to operate functionally in sticking together—is the most important thing.”

Ochoa, who was a three-year starter for BC, collected 372 career saves in her time as a collegiate lacrosse goalie. She is fourth all-time in career saves at Boston College.

“Yeah, a little bit,” McMahon said when asked if Ochoa helped with scouting reports on BC. “She definitely helped, also, by hopping in net for us—she was taking some shots [during practice], which is great. She’s pretty close with some of the [Boston College] players and knows them well.”

A Longmeadow native, Ochoa finds herself back in Western MA, only this time to coach the Minutewomen lacrosse team.

McMahon’s main concern is to ensure her team isn’t timid when going up against such a competitive program. Much time for preparation mixed with a fearless mentality, is something McMahon preaches to all her players.

“We’ve watched them on film and done a lot of scouting to make sure that we’re as prepared as we can be,” McMahon said. “We need to play aggressive, not back down, not being afraid—really just taking care of the ball and looking to attack.”

The Minutewomen had 35 shots on net against Dartmouth, in addition to converting six of their nine free-position attempts. Boston College matches UMass with an average of 35 shots per game (through their first three games).

Keeping a close eye on Boston College star, Sam Apuzzo, UMass will have to adjust their game plan in order to stop her dominant offensive power.

“She’s a great player, first-team, All-American,” McMahon said. “We’re probably going to throw a lot of different things out there, defensively across the board. They have so many different weapons, so it’s hard to focus on just one person.”

Although Apuzzo leads the team with 20 points already (the next BC player has nine), McMahon stresses balancing the defense to focus on more than just one player.

“They have a pretty dynamic offense, so we’re going to throw at [Apuzzo] and at their offense,” McMahon said. “Again, [we need] to play to our strengths, trying to come up with the ball so we can go down the other end [of the field].”

UMass will look to open the season with back-to-back wins, while BC will try to preserve their 3-0 undefeated record.

The game is scheduled for a 3 p.m. start from Chestnut Hill.

Ryan Beaton can be reached at [email protected] or on Twitter @ry_beaton.