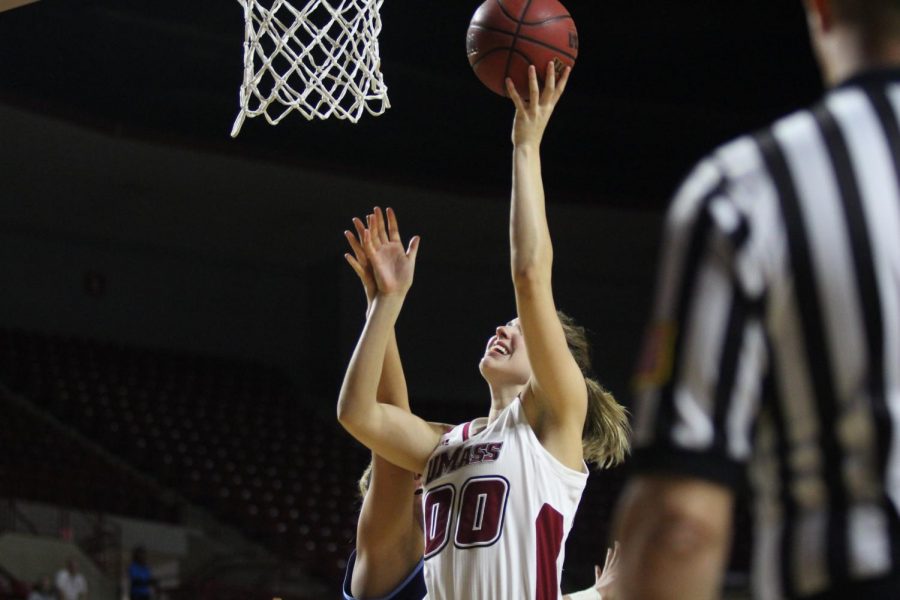 Senior day for the Massachusetts women’s basketball team ended on a high note as the Minutewomen defeated Rhode Island with a score of 87-50.

The win marks UMass’ third in a row to close out the regular season. Heading into the Atlantic 10 tournament this week, UMass coach Tory Verdi thinks the Minutewomen (14-15, 6-10 A-10)  may have found their offensive stride.

“This is something we have talked a lot about,” Verdi said. “We are capable of beating any team in our conference when we play the way we are capable of playing and today it showed that. I think that we are peaking at perhaps the right time right now.”

The Minutewomen’s offensive assault began early in the game. By maintaining a high energy defensive effort, UMass found itself with a lot of easy transition points. The Minutewomen had 21 fast break points in the game, 19 of which came off the 10 steals they forced URI (3-26, 1-15 A-10) to commit.

“I thought that our players played extremely hard,” Verdi said. “They wanted to send our seniors off the right way. I’m just really happy for them and the outcome of the game today.”

UMass’ offensive barrage included double-digits from four different players, including senior Maggie Mulligan. The center scored 16 points and pulled down 11 rebounds, good enough for a double-double in her final Mullins Center appearance. Going into her final home game, Mulligan didn’t let her emotions get the best of her.

“I don’t think my focus was really a factor,” Mulligan said. “I think it made it more intense channeling my emotions, just knowing this was the last time I’m playing in the Mullins. I just really wanted to go out with a bang.”

Mulligan’s sharp offensive performance included shooting 6-7 at the free throw line and dishing out three assists. Her free throw numbers were a part of the near-perfect 16-17 performance at the charity stripe for the Minutewomen on Saturday.

Mulligan added onto her outstanding offensive production by playing lockdown defense. With three blocks on the day, Mulligan shutdown Rhode Island big Nicole Jorgensen. Standing at 6 feet 5 inches, Jorgensen is an inside scoring threat almost every game, however, Mulligan kept Jorgensen to 3-15 from the floor.

“I thought Maggie played one of the best defensive games in her career,” Verdi said. “To go against that kid and take her left shoulder away, she just took her out of the game. She struggled and she was frustrated, and a lot of that has to do with the play of Maggie Mulligan.”

Mulligan, however, gives most of the credit to the Massachusetts coaching staff.

“The coaches really prepared us well with the scouts that they do,” she said. “She was very left-shoulder oriented so if I took that away she was a little ineffective. But I really respect her as a player, she’s a really great sport on the court.”

The win also marked the final career home game for senior Leah McDerment. The forward, whose stats were limited to just five rebounds and three assists, tied the record for most game appearances in Minutewomen history. McDerment, however, never really expected this from her career.

“When I first got here, they had a really bad record,” she said. “My mentality was that it was great to come in and play straight away as a freshman. I just really wanted to bring up the program and turn things around which I think me and Maggie have done. I think one thing we’ve all learned is that when you work at something and you believe in yourself you can do anything you want to do.”

Though their playing careers at the Mullins Center are coming to a close, the seniors are not done yet. Nearing the end of their collegiate careers, Mulligan and McDerment are remaining confident heading into conference tournament play.

“We’re feeling so confident now and I think we’ve just showed how well we can play,” McDerment said. “It feels like everything is just falling into place right now.”

The Minutewomen will tipoff at St. Louis on Tuesday at 8 p.m. in the first game of the A-10 tournament.