On the docket: 21 Savage, GoldLink and Big Sean 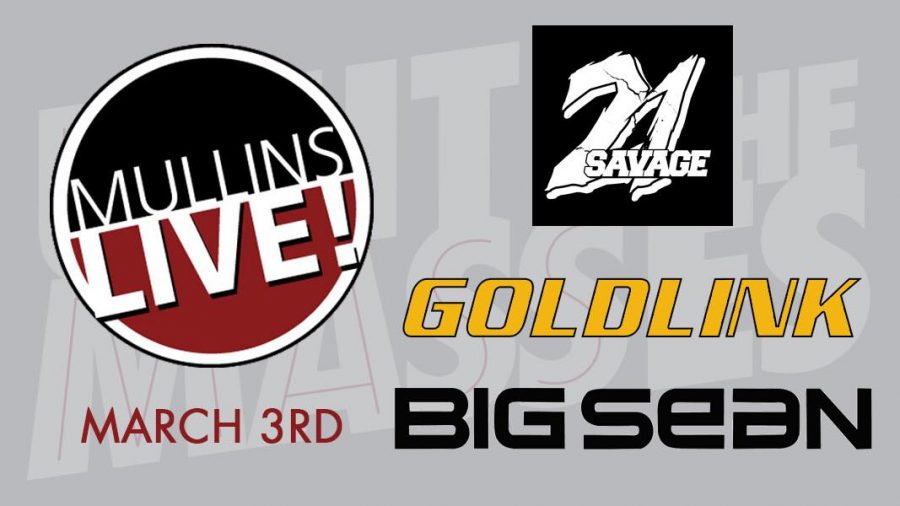 By Jackson Cote and Alvin Buyinza

The University of Massachusetts’ Mullins Center announced the line-up for their 2018 “Mullins Live!” concert series: The docket includes 21 Savage, GoldLink and Big Sean and also features DJ Kai Kai, all of whom will be performing on March 3.

The announcement came on Feb. 24, during the UMass vs. Providence College hockey match.

21 Savage and GoldLink are both rappers who came to prominence in the last two years. 21 Savage’s hit single, “Bank Account,” charted to the top 20 on the 2017 Billboard Hot 100, while GoldLink’s hit single, “Crew,” on his “At What it Cost” album, hit number 45 and earned him a 2017 Grammy nomination for “Best Rap performance.” The most venerated artist of the three, Big Sean, had his fourth studio album, “I Decided,” rise all the way to number one on the 2017 U.S. Billboard 200 chart.

Colombo said that he doesn’t know of GoldLink, but noted that his brother “is huge on” 21 Savage, especially after the release of their new album. In 2016 during his sophomore year at UMass, Colombo attended the “Mullins Live!” concert when Jason Derulo was the headliner. He said the event was “fun” and that he had “a good time.” Colombo added that he’ll most likely get tickets to this year’s concert too.

Senior communication and English literature double major Maryclaire Leon hasn’t attended the “Mullins Live!” concert over the course of her UMass career, but she said she may attend it this year. Leon noted that she knows of Big Sean and listens to his music at the gym; however, she doesn’t listen to the other three artists.

“I’ve never been to [‘Mullins Live!],” said Leon, who mentioned that she doesn’t know much about any of artists on the lineup but does know that “[Big] Sean dated Ariane Grande.”

“I used to listen to Big Sean. I haven’t really in the past,” Jared Yellin, a senior sports management and communication double major, said.

Yellin knows of 21 Savage but isn’t a huge fan of him. However, he said, “My friends listen to him a lot.”

There’s “definitely hype around [21 Savage],” said Yellin, noting that 21 Savage has gained a significant amount of popularity with his most recent album. Yellin mentioned that he has gone to the concert in the past and may attend with his friends this year. However, he said that he has to check all the details surrounding the concert, including the time and date, before he gets a ticket.

“I would be interested,” Yellin said. “If we all went together, that’d be fun.”

Tickets to the concert are free for UMass students and will be available at the Mullins Center box office, starting on Feb. 26 at 10 a.m., according to their website. In order to get into the venue on the day of the event, a ticket and UMass ID are required. Doors open at 11 a.m.