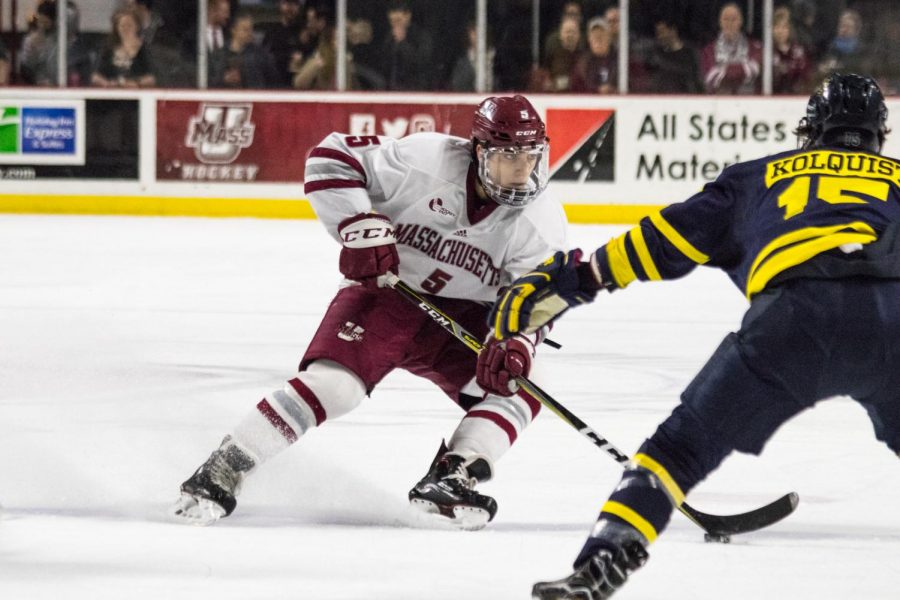 In its previous three games heading into its weekday battle with Merrimack, the Massachusetts hockey team netted five goals, in games that all resulted in defeat.

In front of a small but spirited crowd Tuesday at the Mullins Center, UMass matched its goal scoring output in its 5-2 victory over the Warriors.

“We were outshot but the chances I thought were heavily in our favor. We had a lot of grade-A scoring chances and their goalie made some big saves,” UMass coach Greg Carvel said. “For us to score five goals was much needed, and I thought we did enough to score more than that tonight.”

The Minutemen scored the game’s first goal—a feat they haven’t earned since Jan. 19—when Leonard scored his first of two on a hard wrist shot past Merrimack (8-17-4, 5-13-2 Hockey East) goalie Drew Vogler.

With the two markers, the Amherst native upped his goal total to 10—one behind fellow freshman Mitchell Chaffee for the UMass lead—with both goals proving to be important strikes in the victory.

“When that puck [is] on his stick in the offensive zone, he’s a really elite player,” Carvel said about Leonard. “You are seeing that spark in him again, and we’re tough on him because we ask all of our kids to be responsible without the puck. He was such a gifted player for so long that he grew up and probably never had to play without the puck, so he’s just playing catchup. But what he does with the puck, I’m really glad he’s on our team.

“I’m just trying to play with speed and create some stuff offensively and play well in all three zones. I played with Jack Suter and Austin Albrecht tonight, and those are two really good players so when you’re playing with those guys it makes things easier,” said Leonard.

Less than one minute after Leonard’s second goal, Horton found the back of the net when his shot from the right point deflected off a Warrior defender, giving the newly acquainted Minuteman captain his first goal of the season.

“It was nice to get that goal,” Horton said. “Having that one called back a couple of games ago, it was rough and everything at a pivotal time in the game. But to score one tonight felt nice, and it was rewarding, but I think our team came out and played a full 60 minutes tonight.”

Outshot 33-25 by Merrimack, UMass made the most of the time and space they were given, despite a solid second period from Vogler, in which he turned aside all 13 Minutemen shots, UMass’ breakthrough couldn’t be halted.

“We need guys that don’t usually score to help us, it can’t always be Leonard and Chaffee and Chau,.” Carvel said. “It’s good to see Rufo start scoring again and McLaughlin, and Horton gets his first goal so that was good to see.”

As only the second time the Minutemen have scored more than three goals this semester, UMass hopes its Tuesday night firepower can carry over into its remaining five games.
“We created a lot tonight and in the past couple of games we have as well,” Leonard said.

“Tonight, it was really rewarding to finally put some pucks in the back of the net.”