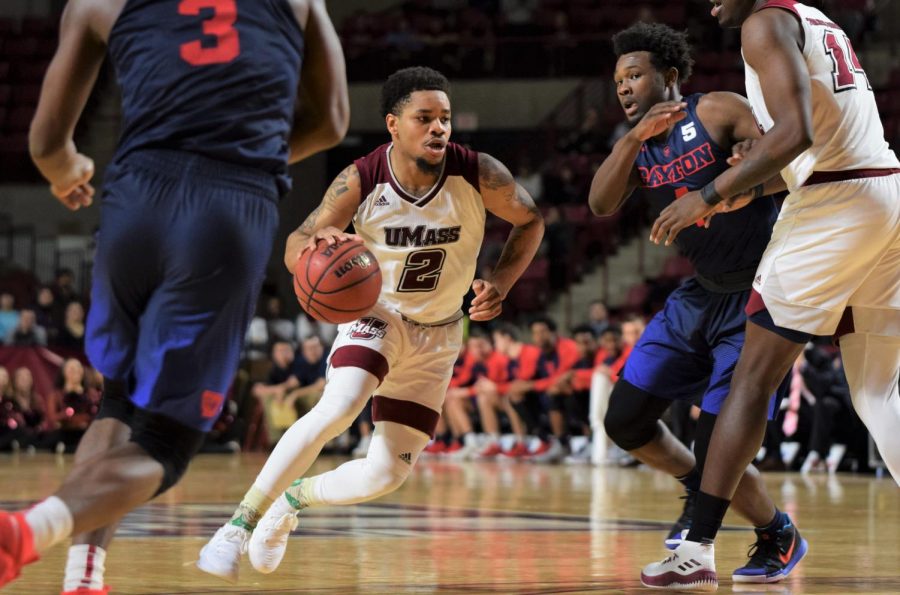 With 1:04 remaining in the second overtime period, UMass was inbounding the ball on its sideline with just seven seconds left on the shot clock and the game tied at 81.

The Minutemen put the ball into leading scorer Luwane Pipkins’ hands, who was quickly double-teamed and lost control of the ball which rolled into the backcourt. Pipkins corralled the loose ball, turned up court and saw just two seconds left to get a shot off.

With Dayton’s Darrell Davis in his face, Pipkins threw up a prayer just a few steps in from half court as the shot clock buzzer roared. The ball floated through the air and looked to be off track, but his prayer was answered when the ball went off the backboard and into the basket to give UMass a three-point lead.

Flyer center Josh Cunningham was fouled on the next possession and went 1-2 from the line to bring Dayton to within two. The Minutemen milked the clock on the next possession, culminating in Unique McLean taking a jumper from the free throw line which he made to give UMass a two-score lead with 12 seconds left, all but icing the game.

“I got the ball on the wing and I drove it,” McLean said. “That was the shot that was open for me. I just took it. I really wasn’t going to think into it, just motion and playing.”

Pipkins would lead the Minutemen with 28 points. C.J. Anderson chipped in 17 for UMass and Carl Pierre added 15 of his own. Cunningham was the leading scorer for the Flyers, finishing with 27 points on 10-13 shooting.

The Minutemen had a chance to win the game in regulation, as McLean grabbed a rebound with 36 seconds left and the game tied at 69, but UMass was called for a 10-second violation to give the ball back to Dayton.

The Minutemen were able to get the stop they needed, though, as Jalen Crutcher had an open look from about five feet out but missed it off the front of the rim.

“Our guys checked whatever nonsense they had at the door,” McCall said. “They’re a connected team. We’ve been practicing harder but shorter, we’ve been being a lot more competitive in practice and I thought that it’s translated into the last two games.”

Much like the regulation, the first overtime was back-and-forth with neither team ever taking command. With 40 seconds on the clock and the game tied at 75, UMass was forced to inbound under the Dayton basket with only two seconds to get a shot off.

After the first play didn’t work and the Minutemen were forced to use a timeout, McCall dialed up a play he had been saving all year- an alley-oop to the high-flying McLean. The play worked to perfection, as Anderson put the ball right in front of the rim where McLean snatched it and powered it home to give the Minutemen the lead.

Cunningham would get fouled on the following possession and make both free throws to once again tie the game, and a Pipkins 3-pointer as the buzzer sounds went long sending the game to double-overtime.

“The first play was a Brad Stevens play,” McCall said. “That didn’t work. You try to keep a couple things in your back pocket in those types of situations where maybe you haven’t shown them all year but you still have them. With Unique’s athleticism, I knew if he was open, C.J. was going to be able to get it up there and he would be able to flush it home.”

UMass has a week off before traveling to Philadelphia to take on Saint Joseph’s.