Question and Answer: Jiya Nair seeks position as student trustee for the SGA

Nair to focus on community engagement 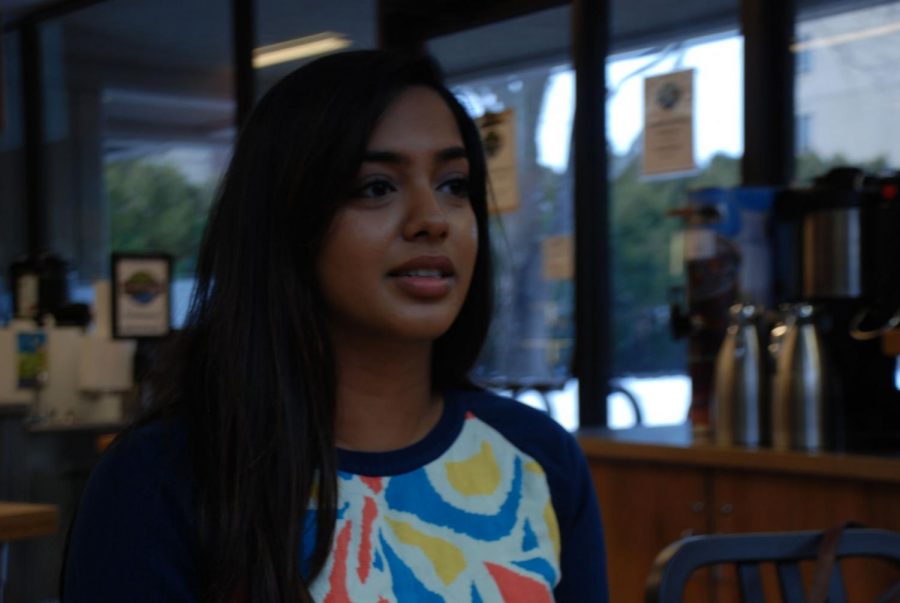 Jiya Nair, a junior political science and operations and information management major, is the president of the South Asian Student Association, the attorney general of the Student Government Association and a residential assistant in Oak Hall. Nair’s running for student trustee of the SGA, focusing her attention on the University’s Land Use Policy, registered student organizations’ abilities to book spaces for events and college affordability.

Here’s the transcript of her question-and-answer interview in preparation for Monday’s SGA executive debate from 6-8 p.m. in the Commonwealth Honors College Events Hall.

Why did you choose to run for student trustee?

Jiya Nair: The reason I wanted to run for student trustee is because I feel like community engagement is really important when it comes to student engagement, especially with a position like student trustee, and I understand the campus community and campus climate. I think that I could be a really good representative as to what the needs are for our campus.

I’ve also been working on a number of board of trustees’ policies, and I feel like that facilitating the policy change process would be a lot easier [if I were] at the table where those decision are being made.

What are your strongest qualifications as a candidate?

JN: I think definitely the fact that I’ve been in the position where I can make change on campus. I have been attorney general for the past two years, and in that, I’ve been able to work a lot on conduct, especially in bringing about restorative justice practices on campus. Before, the code of conduct was something that had to go through the Board of Trustees, but now, it’s changed where it goes through the vice chancellor’s office instead, so you don’t actually have to go to the board.

But, restorative justice, as a practice, isn’t something that you can just snap your fingers, and there it is. You need to make a lot of other changes and have a strategic plan for that to happen, and it involves devoting more funds to the Dean of Students Office. I think the Board of Trustees should be involved in that conversation because it’s not just a UMass Amherst issue. It’s an issue that affects all the UMass campuses.

So, I think I can take those experiences that I’ve had throughout college and [not only] reflect on them, but also, as I said earlier, facilitate those conversations to make sure we’re actually bringing in student voice to the decisions we have at the table.

JN: The Land Use Policy. Right now, there’s a lawsuit against it, so basically, my freshman year, when I was SGA attorney general, there was an act of hate speech on the Fine Arts Center, and that’s when I really got involved and wanted to change the policy because I thought there shouldn’t be a reactionary measure students could take, but at that point, I realized the policy had so many flaws to it.

So, my sophomore year, I formed a task force to look over the policy, look at the changes that SLSO [the Student Legal Services Office] had made and work together with different agencies and propose a draft, so now we’re at the draft stage, and we have it finalized.

I see land use being changed within the semester, but I think there are a lot of other changes we need to implement at the same time to make sure it’s facilitated in the best way possible because it’s not just the policy, but all of the changes that need to be made on campus to student space and student usage for it to actually change in terms of the waste.

I think that student space on campus is something that needs to be reevaluated, especially with the Student Union renovations that are coming about. UMass Lowell has this really great system, where you can just go online, and you can look at the different spaces that are available and book it through that. At UMass, we have to talk to our advisors, we have to talk to events coordinators, we have to go through many different processes just to get our space, but within that, there’s a hierarchy. I think if we can have some sort of similar process that makes space booking more transparent, it’ll at least ease that tension that we have.

Again, going back to working with RSOs, the way that we fund RSOs right now is not stable. When you have a large RSO, for example, like SASA [South Asian Student Association], you have to, before the event, book security, EMTs, crowd control. You need to write a food waiver, have it approved four weeks before your event. You need to book your space a semester before and hope that you get it. And those are all things that increase in terms of expense at the school’s leisure. There’s a lot of inflation, and we don’t get to choose the costs for that because these are things that we are mandated to have by the school, but every year the budget goes down because there are more RSOs that form. So, overtime, we’re just going to get priced out in terms of events, not just cultural RSOs, but RSOs in general.

As the representative of the UMass campus, how do you intend to communicate with the student body?

JN: I think during elections, we do a great job of outreaching to our constituents, but we don’t continue to do the same thing once we’re in the positions that we’re in. Being involved in different communities on campus, I realize that it doesn’t really make sense to have events and then expect students to come to us. You have to go to where the students are.

I think that educational initiatives are really important. We have a lot of great ways to outreach to students, whether that be TVs or emails, things like that—just make it something that’s in your face all the time. We do it with a lot of other things too with residential life, so I think we can easily use those same techniques to interact with students.

JN: I’ve had a lot of experience working with administrators, and what I understand about UMass Amherst and the UMass system is that it is a bureaucracy, and there are a lot of obstacles. So, not everything that we want to do we can do in a year’s span. There are things that we should continue to fight for, regardless of the fact that they might not be able to be implemented within a year.

So, if we take these large goals, continue to work toward them, but make these short-term goals achievable within a year, I think we’ll have greater success.

JN: I don’t know Kevin [Mullen] personally, but I know Rob [Kearns] and Max [Roemer]. They’re very personable. I know that Rob’s been working really hard on sustainability measures, and that has been something that he owns. And I think that that’s really important, to have strength in your convictions and to really own your message.

Everyone knows Max. He’s just one of those people that is out there, easy to talk to. You know what he’s passionate about.

JN: I think the biggest thing for me is that I see myself less as a candidate. I just want to represent the student voice. I haven’t been a Senator before. I never had to run in an election in terms of student government.

The reason I wanted to do this is that I felt like I could do this job effectively.

Portions of this interview have been edited out for length.

Jackson Cote can be reached at [email protected] and followed on Twitter @jackson_k_ cote.