Kiara Oliver is about to take the Atlantic 10 by storm 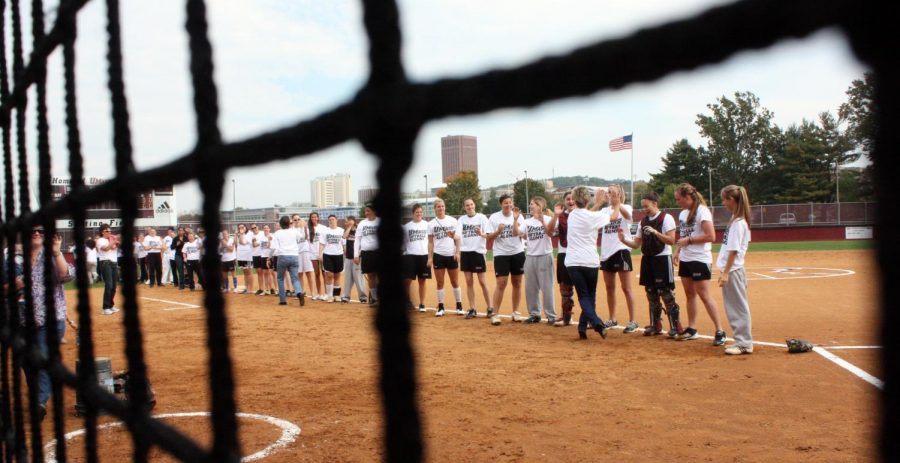 It was mid-June 2015; summer is right on the doorstep, the beach just a few steps away. But for the North Kingstown High softball team, June means something much different.

For them, mid-June is the culmination of a full season’s work. In their eyes, summer can wait, as much more important business was in need of attention. A season can’t be completed without a state championship.

And from their perspective, the title “Rhode Island State Champions” is more important than anything.

One important piece on this team is sophomore pitcher Kiara Oliver. Having shared the mound with 2015 Gatorade Player of the Year Rachel Kantor, Oliver was looking to be a cornerstone on back-to-back state championship teams.

For her, it had been a crazy season. Massachusetts coach Kristi Stefanoni was banging down her door to play for them in two years and for good reason. She’s had pressure on her since she walked onto the softball field at North Kingstown High for the first time as a freshman.

But on June 17, 2015, because of an injury to Kantor, Oliver was forced to throw a complete game in the Division I state championship against rival Coventry High School—the exact team Oliver and North Kingstown took down in the title game the year before.

The pressure was as big as it’s ever been.

Oliver pitched well. But ultimately, Coventry got its revenge, winning by a score of 3-2 on a walkoff.

“For her, for us, for all of us, it was a learning experience,” said North Kingstown head coach Adam Laliberte. “But I think it just drove her so much more to come back her next season and say, ‘that’s not going to happen again.’”

And as the future would play out, coach Laliberte was very right about one thing: for Oliver, it would not happen again.
…

Kiara Oliver began playing softball at the age of 10. Back then, her family was fully invested in her older brother’s baseball career and the sport itself. She wanted to follow along but in her own way.

“My older brother played baseball really competitively,” said Oliver. “I guess I’ve been around it a long time with my parents and everything. We’ve been a big baseball family so that’s part of the reason why I kept going with it.”

As she went through North Kingstown’s youth leagues, it was clear that Oliver wasn’t just any player; she had a serious talent as a softball pitcher. She threw the ball with speed that very few girls possessed at such an early age.

Prior to her freshmen year in high school, Laliberte knew he had someone special on the horizon.

“We had some pretty good indications that we had a good player coming,” Laliberte said. “It wasn’t that she was a complete surprise or anything like that.”

When Oliver arrived at North Kingstown High for her freshman year, she was immediately given half of the pitching duties for every game. Her and Kantor each took the mound for half of every game during the 2014 and 2015 seasons.

It was around 2015 when UMass began to recruit Oliver.

Shortly after the tough state championship loss in 2015, Oliver would commit to play softball at UMass starting in the fall of 2017. Stefanoni was a huge selling point for Oliver.

“Coach Kristi was for sure the reason I came to UMass,” said Oliver. “She’s amazing. She’s one of the best people I’ve ever met. She’s such a great coach.”

Oliver’s first two years of softball in high school were great. But once she committed to take her talents to Western Massachusetts, things only got better from there.
…

If you were to watch Oliver pitch from afar, the first thing you’d notice is her velocity.

“I think at the time that I got her as a freshman, I’d been coaching for eight or nine years,” said Laliberte. “The first thing I noticed with her was speed-wise, you don’t see what she can do. She threw harder than anybody I’d seen before and that was as a freshman.”

Laliberte hasn’t been the only important coach to notice Oliver’s speed on her pitches. Stefanoni extended her the invite to the winter clinic in January of 2015 upon seeing her speed.

“[From the video] obviously the first thing I noticed right away was that she threw extremely hard,” stated Stefanoni. “Right away that’s a big seller for me.”

Once you identify her velocity, you’d come to see that what really sets her high and above the rest is her work ethic.

“Aside from how hard she throws, the other part of her was her work ethic,” Laliberte said. “She’s got unbelievable work ethic and she’s been like that since she was a freshman.

“She’s obviously very talented, like that comes with it. But she really harnesses her talent through her work ethic.”

“From the first day she stepped in, I knew she was a hard worker,” said Colleran. “She comes in, she puts in the work. She really does care about this team and about this program and it’s shown.”

As you get to know her, you’d realize that what makes her who she is is her politeness and personality. For Stefanoni, she got to see this first-hand at that winter clinic in January of 2015.

“On top of her being a really outstanding pitcher for her age at the time, her personality, her attitude and just the type of human being she was at the time—it was great,” Stefanoni said. “She was so bubbly and there was always a smile on her face. She was so polite.”

Back home in North Kingstown, her impact in the community is felt throughout.

“She does pitching lessons and she runs clinics for the younger kids in the town,” said Laliberte. “She does a few initiatives that she works on through the church. She’s someone who’s very giving of her time. I mean, someone who’s that good at the sport, she was very good about giving back to the other people in the community.”
…

After Kantor departed to play softball at Wesleyan University, Oliver was set to be the sole pitcher for North Kingstown for the 2016 season. But with the added pressure, she was fortunate enough to get some aid from her dugout.

“The other kids loved him,” Laliberte said. “He did a great job because he was there not only in her interest but in the interest of everybody really.

“I think it helped her a lot because he is so in-tune with her. He knows what she likes to throw. He ended up calling a lot of her pitches.”

With the extra help, Oliver would go onto put up stunning numbers during her junior year. She went 16-0 with an ERA of 0.20. She struck out 213 batters in 104 innings pitched, allowing only 26 hits.

After losing the state championship in 2015, Oliver led her team back to the title game and won it in 2016.

Oliver repeated the feat in 2017, her senior season, after pitching to a record of 18-1, giving up a total of four earned runs over 123 innings. She also threw four no hitters and two perfect games, alongside 230 strikeouts. But that team was much different. That season was different.

According to Laliberte, the 2017 state championship game was Oliver’s greatest moment with North Kingstown.

“Pretty much every year she was there we were the favorites to win it,” Laliberte said. “We weren’t last year though because we had lost pretty much all of the talent around her. We really weren’t supposed to win but we did. She carried us.”

Even though the talent was sparse around her, Oliver still holds the 2017 state championship trophy the highest.

“At the time of the championship, we were a really close team,” said Oliver. “It was probably the best experience I’ve had with the team over the course of a year because of how good of friends we were”.

Over the course of her high school career, Oliver filled her trophy case to the brim and then some. She earned Rhode Island Gatorade Player of the Year honors her junior and senior year. She was first team all-state and all-division all four years of high school. She was named Player of the Year by the Providence Journal.

Since coming to UMass, Oliver has shined. Through five outings, she has an ERA of 2.47. She has two complete games, including a shutout against Southern Mississippi.

One of the reasons her time here has been so successful thus far can be traced back to Colleran.

Oliver has a lot of expectations for her time here at UMass; some she’s surpassed, some she hasn’t.

“I hope that we win the Atlantic 10,” Oliver said. “I just want a good experience and I already have one. The team’s so great and we’re so close. I just hope that over the next four years it continues.”
…

It’s June 17, 2015 again. Coventry High School is celebrating on the Rhode Island College softball fields. Half of the stands are in jubilation; half are in disbelief. Players are hugging on both sides but for very different reasons.

As Kiara Oliver walks off of the mound, she realizes she hates the taste of this. Her thoughts are in a million different places, but if there’s one thing for certain it’s that her motivation from that point forward won’t be topped. This result can’t happen again.

She doesn’t know what the future holds. In her mind, she hopes for another opportunity to play for a state championship and the chance to continue playing the sport she loves in college.

If only she knew.