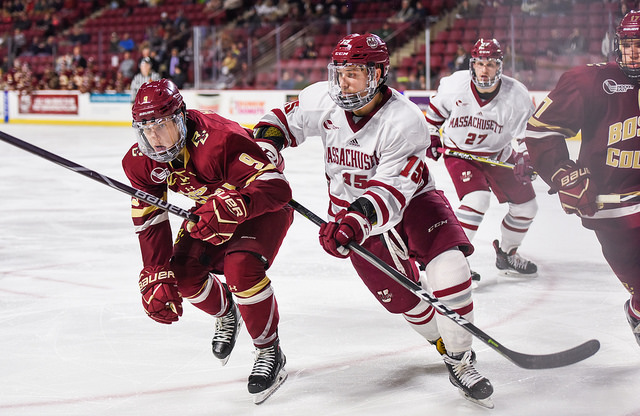 Ahead 2-1 at the start of the third period, UMass sophomore Griff Jeszka delivered a harmless looking hit on a BC skater, but he went down hard, and the referees proceeded to give the Eagles a five-minute major power play for contact to the head.

BC eventually tied the game late in the extended man-advantage when David Cotton beat Minutemen goalie Matt Murray with a one-time shot at 7:22.

The Eagles carried that momentum over for the remainder of the period, depositing three more unanswered goals, to swipe what looked to be a hard-fought victory away from UMass.

“The five-minute major we got was hardly a penalty,” Minutemen coach Greg Carvel said. “It’s frustrating (and) I give BC credit. They’re a skilled team and (when) you give them time and space in the offensive zone, they made us pay.”

UMass (13-17-2, 7-13-2 Hockey East Association) appeared to be on its way to another upset when freshman Jake Gaudet scored on a shot that skipped past BC (15-13-3, 15-6-0 Hockey East) goalie Joseph Woll 36 seconds into play, furthering the Minutemen’s recent trend of tallying the first goal of the game.

The Eagles evened the score almost four minutes later when Jacob Tortora fired a hard shot past Murray, but UMass took the lead again when freshman George Mika finished off a slick backhander at 11:57 of the second period, putting the Minutemen up 2-1.

Then came Jeszka’s questionable penalty and the decision rapidly shifted the tides of the game, leading to UMass’ second loss of the season once scoring first (11-2-2), and the first loss when leading after two periods (11-1-1).

“Any time that you try and kill off a five-minute major it’s tough,” Minutemen senior captain Jake Horton. “We had a good chunk of it gone there, we had just over three minutes killed off, but they’re a skilled team and they’re a team we don’t want on the power play because we know they’re going to make plays.”

BC was awarded five power plays over the course of the contest—only capitalizing on the major—while UMass finished with two man-advantage opportunities.

Freshman John Leonard left the game halfway through the second period after taking an awkward fall to the ice and did not return.

Leading the Minutemen in points heading into the weekday matchup at the Mullins Center, being without No. 9’s services for the final 20 minutes highlighted another disadvantage UMass tried to fight through against the Eagles.

“Leonard’s a huge part of our team, a huge player for us, scores a lot of goals, but I think that we have the depth up front to score through all four lines,” Mika said. “Hopefully he gets back in the lineup soon, but I don’t think we’re too worried.”

Carvel didn’t disclose the severity of Leonard’s injury but did say he’ll likely be out for “a little bit of time.”

With just two games left for the Minutemen and playoff structure still very much to be decided, Thursday’s loss to BC was as frustrating as they come for UMass.

“I feel for my kids, they play hard,” Carvel said. “One team falls down, one team plays hard.”