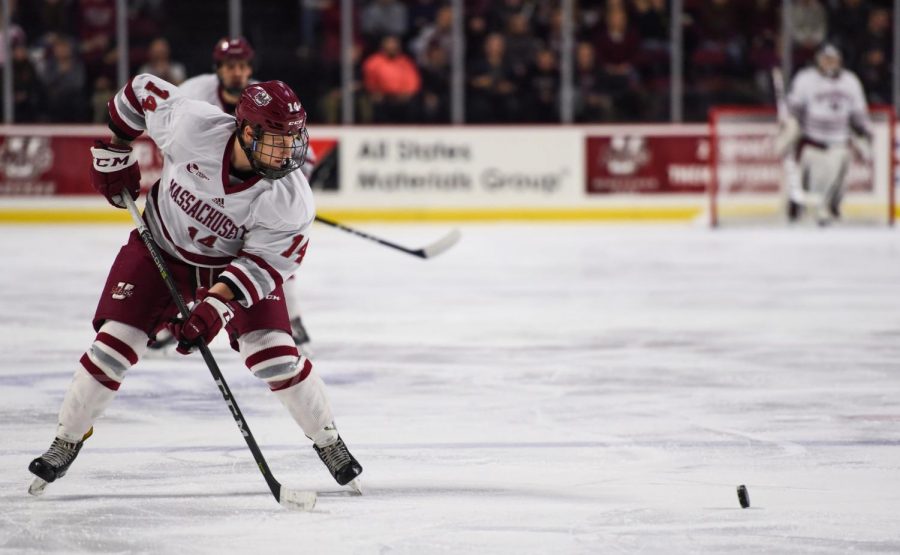 The Massachusetts hockey team will look to snap its four-game losing streak this Friday when they host Hockey East rival Boston University.

“Anytime we lose, one thing about my staff is we do a good job looking at it as an opportunity to get better, figure out where we can get be better,” UMass coach Greg Carvel said. “That’s what we took away from this weekend; we played fairly well, probably well enough to win one if not two, but if you’re losing both of those games, then there’s definitely issues that we need to figure out.”

Coming off a disappointing pair of home games against Maine, UMass (11-14-1, 5-10-1 HEA) is hoping to re-establish itself in conference play. Having only scored five goals in the last four games, the Minutemen have focused on their offensive play.

“We just have to find more consistency, and it’s a mark of a young team, we’re inconsistent to be able to beat some good teams and then not find ways to win,” Carvel said. “I’m really just more concerned about the level of play for our team. It wasn’t bad this past weekend but it obviously wasn’t good enough.”

Junior Austin Plevy admitted that UMass needed to win the pair of games against Maine, but now believes that his teammates understand their need to focus on the little details of “what makes them successful.”

“When we’re doing the little things that make us good we’re successful,” Plevy said. “Look at wins like Providence and Northeastern, that’s when we’re playing our brand of hockey.

The Terriers are coming off a sweep at Arizona State, where BU scored 12 total goals against the Sun Devils including an 8-0 shutout performance last Friday night. The Terriers average 3.2 goals per game and have the fifth-ranked power play in the conference with 25 man-advantage goals this season.

“I don’t worry about who we’re playing. We worry about ourselves, we’ve shown that if we play a certain level we can beat better teams in our league,” Carvel said. “We’ll have to be ready, they’re always a good team, they’ve got the pedigree in their lineup. I say it all the time, if we play to the standard we’re capable of, we can beat them.”

The Minutemen are led by Oliver Chau who has posted eight goals and 12 assists for a team-high 20 points so far this season. Mitchell Chaffee has netted a team-leading 10 goals while also adding eight assists for 18 points.

UMass has only seen consistent success from the upper half of its line combinations, showing the need for depth and other players to step up. Carvel is confident in his players’ ability to compete offensively—it’s just a matter of having them execute.

“It’s getting to the point where it’s Chaffee, Chau, and [John] Leonard,” Carvel said. “We have to get guys like George Mika, [Philip] Lagunov, [Jake] Gaudet, guys who play pretty good minutes, they need to find ways to help us offensively.”

Jake Oettinger has seen the bulk of play between the pipes for the Terriers clocking in with 1,435.35 minutes in net. The sophomore has accumulated a 12-10-2 record and a .908 save percentage.

Carvel is unsure who will claim the net on Friday night as he continues to bounce between Ryan Wischow and Matt Murray. Murray posts a 4-9-1 record while Wischow has gone 7-5-0 with his time in net.

“Still waiting for one of them to lead the way,” Carvel said. “Be nice if our guys scored three or more goals for them, which we haven’t been able to do.”