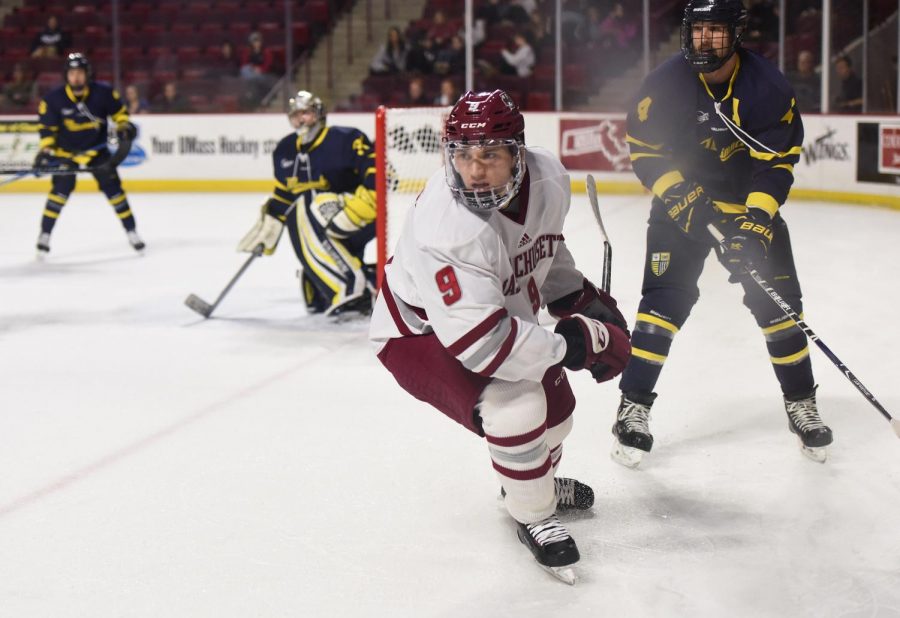 In a rubber match with Merrimack, the Massachusetts hockey team snapped its six-game losing streak with a 5-2 win over the Warriors.

“I thought it was a real solid 60 minutes by our guys tonight,” UMass coach Greg Carvel said. “For us to score five goals is much needed, I thought we did enough to even score more than that.”

John Leonard had two goals for the Minutemen, the latter of the two came just 26 seconds into the third period to give UMass a confidence boost for the remainder of the match.

The freshman found himself one-on-one with Drew Voger and beat the netminder stick-side to lift UMass 3-1. 47 seconds later Jake Horton put another one past Voger to net the Minutemen’s fourth goal of the game and first time scoring more than three goals since Jan. 13 against Vermont (6-3). The goal counted as the seniors’ first of the season.

“[Leonard’s] two goals tonight, they looked easy to him, when he scores it looks easy and it’s not,” Carvel said. “He’s really impressive with the puck and we’re just trying to make him more of a complete player. He’s growing, he had a hell of a game.”

The Minutemen struck first at the 12:15 mark of the first period from John Leonard, who came hot off the bench intercepting the puck and juking past a defender before ripping a shot glove side past Drew Voger to put UMass on the board first.

The goal counted as Leonard’s ninth of the season, making him the second highest goal scorer on UMass.

“I knew I owed the team one, it was kind of my fault that goal at the end of the second period, so I just tried to make up for it as best as I could,” Leonard said. “I’m just trying to play with speed and create offensively.”

UMass capitalized on two of the four man-advantage opportunities throughout the night with the first occurring with 4:10 remaining in the first frame of play. Niko Rufo tapped home his 9th goal of the season off a nice feed from Philip Lagunov to take the 2-0 lead.

Jake McLaughlin sniped the second power play goal into the upper right corner past Voger to cap off the scoring at the 9:36 mark of the third. The goal counted as the sophomore’s third of the season.

“It was good to see the power play score two goals and good to see us be disciplined and stay out of the penalty box,” Carvel said.

Matt Murray kept Merrimack off the board for a majority of the second period, defending an opening fast-break opportunity from Cole McBride.

The Warriors finally got on the scoreboard at 19:30 when Ludvig Larsson sniped the puck past Murray as the clock was winding down in the middle frame of play, cutting the Merrimack deficit to one.

Larsson tallied his second of the night at the 8:11 mark in the third period to make it 4-2. The junior brought his goal total to 11, tying Brett Seney as goal-leader.

Both netminders faced a tough 20 minutes in the second period with Voger turning aside 13 shots and Murray saving 12. Murray finished with 31 saves on the night while Voger finished with 20.

“I know we were outshot but the chances I thought were heavily in our favor,” Carvel said. “We had a lot of grade-A scoring chances that their goalie had to make some big saves.

“I thought we did a fairly good job, much needed win,” he said.