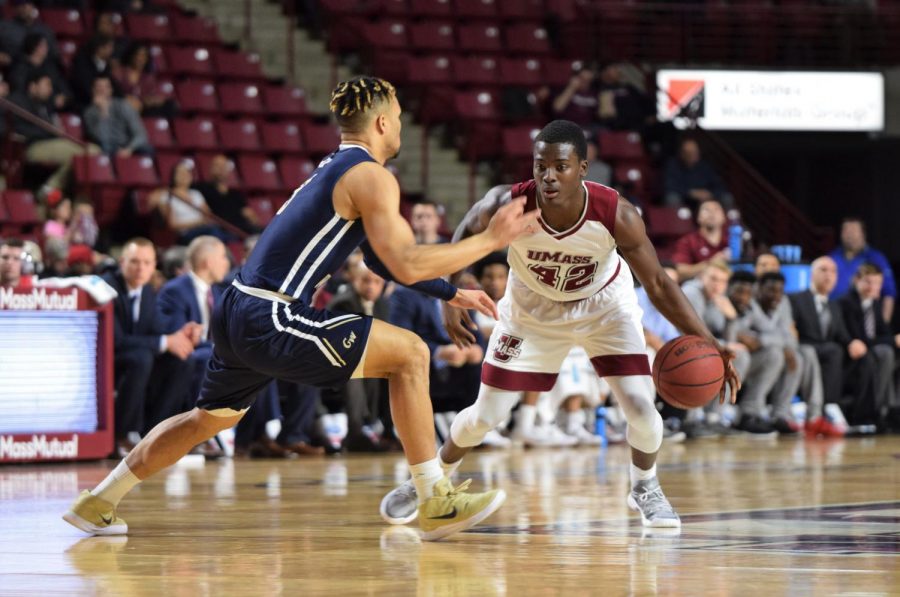 Struggling with the roster, UMass coach Matt McCall was forced to play three walk-ons. Rayshawn Miller–who has played key role all season, Randall West and Jaylen Franklin all saw time on the floor.

West and Miller each played 12 minutes, Franklin came in for only one. The Minutemen also experienced foul trouble, making McCall’s job that much more difficult.

Both C.J. Anderson and Rayshawn Miller fouled out and Malik Hines and Unique McLean finished with four fouls.

Worn down, the Minutemen have lost eight of their last nine games. Facing a Davidson (15-10, 10-4 A-10) team who entered the game 9-4 in conference, McCall was going to have to rely heavily on Pipkins to score enough to keep the UMass in it.

In 39 minutes, the sophomore guard did what was asked of him, scoring 31 points and racking up nine assists while only collecting two fouls.

“I don’t look to do anything special,” Pipkins said to the Daily Hampshire Gazette postgame. “I just look to lead my team the way I’m supposed to and try to get the job done.”

A 3-pointer with 13:59 left in the game pulled UMass even with Davidson at 47. It would be the closest UMass got to retaking the lead.

The Minutemen had to contend with 6-foot-8 forward Peyton Aldridge. Already a mismatch for UMass who can only field one true big man in Malik Hines, Aldridge gave the Minutemen fits for all 40 minutes of the game.

The senior forward finished with 38 points, 14 rebounds and three blocks while only picking up two fouls.

“He causes you so many different problems out there on the floor,” McCall said to the Gazette. “He was terrific tonight.”

In a distant second, Kellan Grady finished with 12 points and Will Magarity had 11.

Even though the Minutemen faced obstacles everywhere they looked, they still managed to keep the game close. The largest deficit UMass faced was 13 points and it came as late as 3:28 left in the game.

A late 3-pointer by Carl Pierre with five seconds left in the game cut that deficit down to four.

“Our guys didn’t quit,” McCall said to the Gazette. “You like to see that, especially with how the season has gone for us thus far.”

Tied with Fordham for worst record in the A-10, UMass has only four regular season games remaining before the conference tournament.

Next up will be a home contest vs. Virginia Commonwealth, this Wednesday.

Ranked fifth in the A-10, the Rams are 7-7 in the conference. This will be their first meeting with UMass this season.