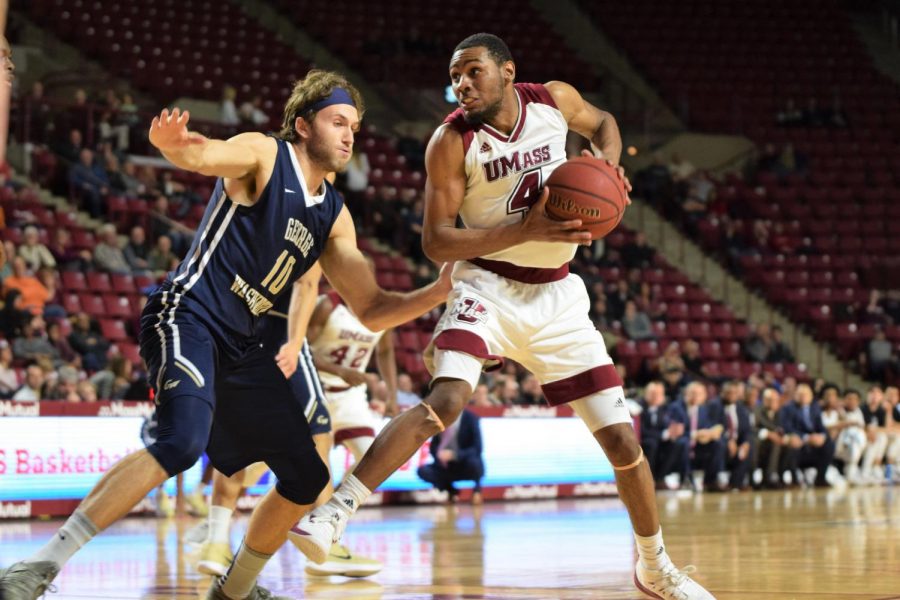 The Massachusetts men’s basketball team has lost its last five contests, but the Minutemen aren’t quitting just yet.

Sitting at 11-18 on the season and 4-12 in conference play, UMass is preparing for its final two games of the season, a trip to Richmond on Wednesday followed by Senior Night against Duquesne on Saturday.

The Minutemen are coming off an overtime loss to George Mason on Saturday, a game they were never expected to compete in, only dressing four scholarship players and missing leading scorer Luwane Pipkins.

With Pipkins and freshman big man Khalea Turner-Morris set to return Wednesday, coach Matt McCall still only has six scholarship players at his disposal, and UMass will likely be the underdog in both of its final matchups—a role the Minutemen are not shying away from.

“I think we adopted that mindset even early on in the year,” said freshman guard Carl Pierre. “A big theme of practice today was that no one believes in us, no one’s just going to give it to us, so we just got to go get it. The circumstances probably fit more into a traditional underdog now, but we’ve always had that mindset.”

The Spiders (9-19, 7-9 Atlantic 10) have bounced back from a nightmarish non-conference slate to post a respectable conference record, currently holding in ninth place in the standings. Richmond is dealing with a slide of its own, having lost five straight entering Wednesday’s matchup as well.

Saturday’s loss to Mason was nearly the ultimate underdog upset, as UMass came within inches of topping the Patriots on the road in the direst of circumstances. For senior C.J. Anderson, the long odds only sweeten the pot.

The Minutemen sit in 13th place in the conference, and can’t climb higher than 11th in these final two games, guaranteeing a Wednesday game in the first round of next week’s A-10 tournament. The numbers and the odds aren’t kind, but the confidence hasn’t wavered.

“For sure, we could surprise some people,” Pierre said. “We have enough with what we have now, in my opinion. We have enough to beat any team in the conference. It just starts with a belief in ourselves, and I think we could make some noise.”

The Minutemen have two more opportunities to bolster their conference record before the tournament, and just one week to sharpen their game, rest their legs and make their final adjustments before the postseason.

UMass tips off at Richmond at 7 p.m. on Wednesday.