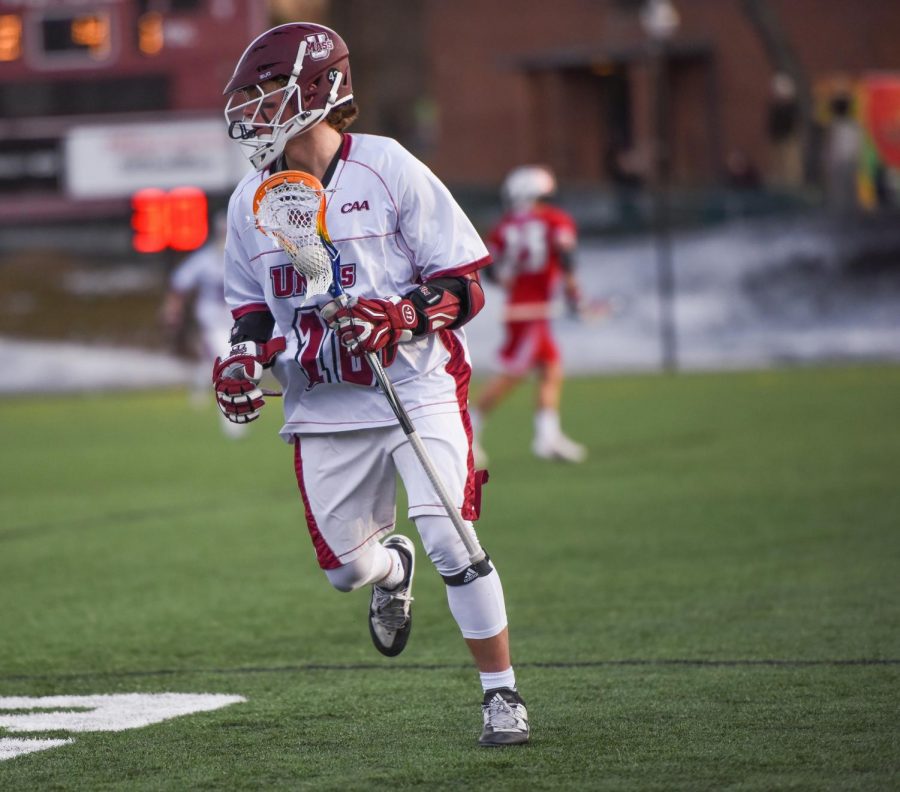 The Minutemen (1-1) outplayed the Pioneers (1-1) throughout the game, leading the entire way through. It was a lightning fast start for UMass that was the difference with Minutemen scoring the first four goals of the game, all of which coming in the first six minutes of the game.

Senior Noah Rak opened things up for the Minutemen, winning the opening faceoff and taking it into the crease and beating Pioneer goalie Brooks Dutton to give UMass the lead just eight seconds in.

Just 38 seconds later senior Jake Lisauskas added another goal to give the Minutemen a 2-0 lead before a full minute had ticked off the game clock.

Attack Ben Spencer would add another goal with 10:06 remaining in the quarter, followed by a score from freshman Chris Connolly and before Sacred Heart knew what hit them, they were in a 4-0 hole.

“We wanted to start fast and fortunately we were able to with Noah scoring early and going up 5-1,” UMass coach Greg Cannella said. “Sacred Heart is a very good team and a very explosive team. We had to get out to a good start based on what we did Saturday. Tried to do our best to get out and get going.”

After a tough loss on Saturday, Cannella was pleased with the way his team responded to adversity.

“It gives us an indication of who our guys are and how they got off the mat and were able to come back and play which was a good sign,” Cannella said.

The Minutemen would outscore Sacred Heart 4-2 in the third period to give them a comfortable 12-7 lead heading into the final quarter.

The UMass offense was run through Carr, who finished with three goals and four assists. The hat trick was the fourth in his Minutemen career.

When Carr is scoring the way he was today, the UMass offense becomes exponentially better as the defense is then forced to focus in on him and he then has the ability to distribute to his teammates.

“Sometimes they’ll slide a little faster to you when you have a couple goals under your belt,” Carr said. “It’s nice to be able to see the field a little better. Get back and get the feel of the game.”

After tossing two assists in his debut with the Minutemen, Connolly scored four goals on six shots against the Pioneers.

Connolly credits practicing against UMass goalie Sean Sconone every day has helped him prepare for the games.

“I was just trying to get the ball on cage,” Connolly said. “He’s a big goalie so I was trying to shoot it low. I always get stoned in practice by Sconone, he’s a bigger kid so I’ve had a lot of practice. It was just falling for me today.”

Though just a freshman, Connolly has already earned the trust of his coach, and the results have been promising.

“We have a lot of trust in Chris. He was on the receiving end of a lot of transition goals. That’s what the attack’s job is, to finish the ball. Chris has a really good feel for the game and sense of the game. He’s improved every day since he’s been here in September.”

The Minutemen will have nearly two weeks off before their next game, as they will take on Harvard Saturday, Feb. 24.