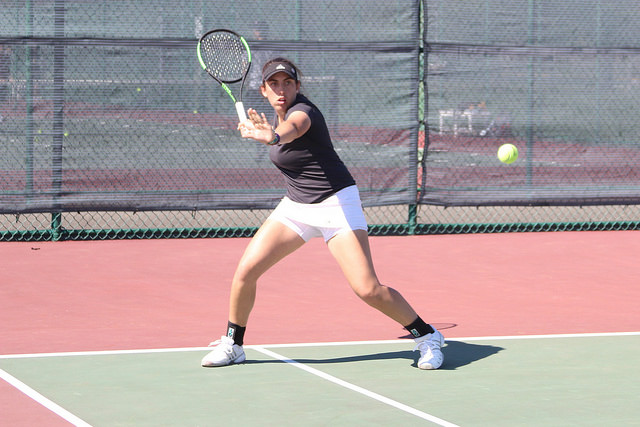 The Massachusetts tennis team has two matches against LIU Brooklyn and Army before Atlantic 10 play begins next weekend, and UMass hopes to use these two opponents to prepare for the all-important A-10 matchups.

Despite dropping another match to Brown and losing to Boston College in January, the Minutewomen’s goal has not been changed or altered. The goal is simple: win another A-10 Championship. To do that, UMass will need to start playing its best tennis right now.

With 13 matches to go before the A-10 Championships, the Minutewomen will face off against six conference foes before heading down to Orlando, Florida to try to earn a tournament win and secure an automatic bid to the NCAAs.

The next two matches will be against non-conference opponents LIU Brooklyn on Feb. 10, and Army West Point on Feb 17., before opening conference play. The match against LIU Brooklyn will be their last one played in Amherst until the final day of the regular season.

“What is going to set us apart is our ability to keep learning how to handle those pressure moments and stay poised,” coach Juancarlos Nunez said. “We want to play our best tennis in the biggest spots.”

Nunez has already seen his team come up clutch in the early spring season, including in its last match, erasing a deficit to St. John’s to earn a 4-3 victory last Sunday at the Bay Street Tennis Club in Amherst.

Senior Ana Yrazusta will continue to lead UMass all season long after going undefeated in the past three competitions in both singles and doubles matchups. An A-10 All-Conference First Team selection last season, Yrazusta has been a staple for Minutewomen tennis for her entire collegiate career.

“Ana’s a terrific player,” Nunez said. “She’s found a good balance between her energy, fieriness and competitiveness while also not trying too hard or too much and pressing.”

Yrazusta will be alongside her familiar partner, Laura Moreno, for her doubles match this Saturday against LIU Brooklyn.

The match will once again be played at Bay Street Tennis Club due to the inclement weather.

As UMass continues to put spring head-to-head matchups underneath its belt, the excitement is rising as crunch time is almost upon the Minutewomen’s season.

Despite the rising stakes, Nunez and his team are prepared for whatever challenge may be presented to them.

“We feel like we can compete with anyone,” Nunez said. “It is all about our execution, and we are ready.”

Tim Sorota can be reached at [email protected] and followed on Twitter @timsorota.