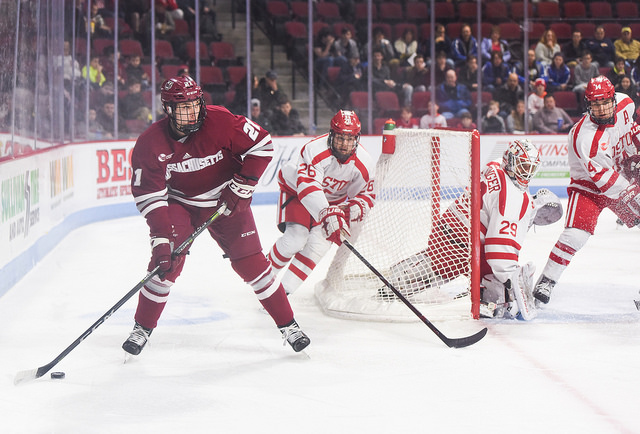 Down 3-1 with 20 minutes left in the game, UMass only managed 13 shots through the first two periods and were barely creating any high-percentage chances, while the Terriers had 31 shots and were attacking Minutemen goalie Matt Murray all night.

However, UMass scored twice in the final period, one from sophomore Jack Suter and one from freshman Mitchell Chaffee, to avoid another disappointing outcome as well as bring home a valuable point in the standings with the 3-3 tie.

“We can’t beat BU if we don’t out-compete them,” Minutemen coach Greg Carvel said. “I didn’t think it was until the third period that we actually started to play at a level where we need to play to compete against them.”

UMass (12-16-2, 6-12-2 Hockey East Association) freshman Mario Ferraro concluded the night with two assists which puts the King City, Ontario native in a tie with former Minuteman Brandon Montour for most points by a freshmen defensemen in a single-season (20).

“He creates a lot for us on the backend,” said Carvel. “Cale (Makar) gets the scoring chances and Mario sets a lot of guys up.”

Neither the Minutemen or the Terriers (15-11-3, 10-7-3 Hockey East) could convert in overtime, and UMass didn’t record a single shot in the five-minute extra period.

For the second straight game, the Minutemen scored first when Griff Jeszka sent a quick wrist shot from the slot past Terrier goalie Jake Oettinger at 7:45 of the first period.

Unfazed, the Terriers bull-rushed the UMass defensive zone on an odd-man rush and Shane Bowers cleaned up a big rebound from Murray, following Logan Cockerill’s first shot, tying the game right back up at 8:19.

BU used Bowers’ first goal as fuel as the Terriers hemmed the Minutemen in their zone for much of the period afterward, piling 19 total shots in the first 20 minutes.

Before the first buzzer sounded the Terriers scored again when Bobo Carpenter picked up an Oliver Chau turnover on UMass’ attacking blueline, raced in, and fooled Murray with a nice top-corner shot with just 4.5 seconds left.

It took less than two minutes into the second period for BU to receive its first power play of the night and the Terriers again wasted no time making the Minutemen pay.

With Austin Albrecht in the box for cross-checking, Bowers tallied his second of the night after sustaining body-position in front of Murray and pushing the puck into the wide-open cage following Dante Fabbro’s initial shot from the point.

“We need to learn to start that off, me included, everyone needs to be better and we need to compete a full 60 minutes,” Chaffee said. “We can’t just compete half the game and expect to win.”

BU held onto its 3-1 lead but continued to pour on the pressure, finishing the period with 12 shots while UMass registered just four.

Desperation turned on for the Minutemen in the third period and two goals resulted from the higher compete level.

UMass worked a cycle around the offensive zone, which freed Albrecht up high, and he whipped a turnaround shot on net that Suter was waiting for and redirected it past Oettinger to cut the deficit to one.

With a pep in their step following the goal, the Minutemen tied the game at 12:38 when Chaffee sent home a loose puck right outside the BU crease.

Chaffee carried the puck into the zone, dropped the puck between his legs for Niko Rufo, who then snapped a shot off on Oettinger and the rebound popped right out to Chaffee. No. 21 scored his team-leading 12th goal of the season to salvage the tie for UMass.

Murray finished with 38 saves while Oettinger turned made 20 in the draw.

“Moving forward the biggest thing is to just work as hard as we can and to compete,” Ferraro said. “At the end of the day it’s all about who competes harder, that’s who is going to come out with the win. As long as you do that, as coach always says, you get what you deserve.”

Ryan Ames can be reached at [email protected], and followed on Twitter @_RyanAmes.