Rally was one of many across the nation 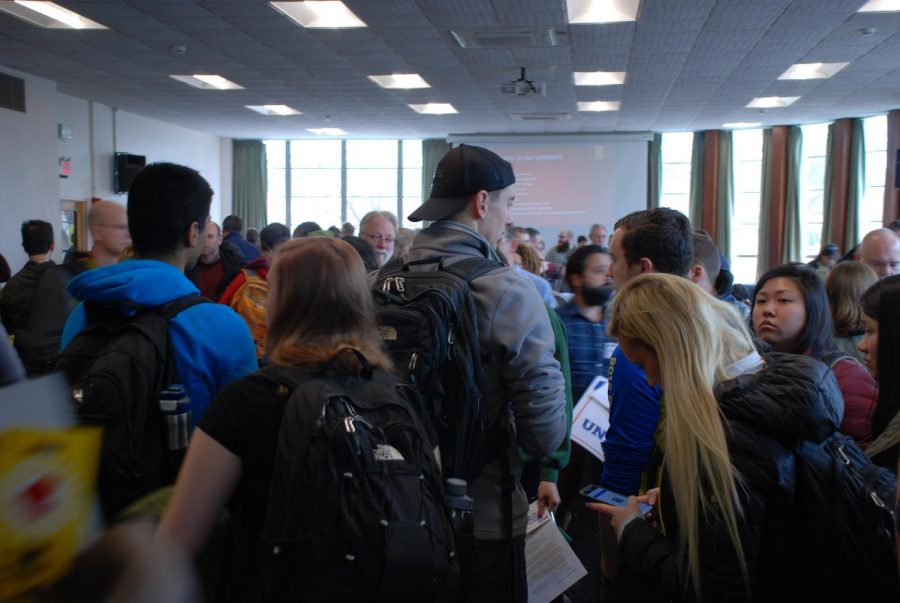 By Jackson Cote and Kathrine Esten

Over one hundred University of Massachusetts union members rallied Monday in the Student Union, where speakers demanded for more union jobs and urged workers to continue to band together.

Part of the national Working People’s Day of Action, similar actions happened in major cities across the country, including in Boston, Springfield and Worcester, Massachusetts, as well as in Philadelphia, Phoenix, Minnesota and elsewhere.

The actions were sparked by Janus v. AFSCME, a Supreme Court case that poses the question of whether requiring non-public-union workers to pay for collective bargaining and other activities violates their First Amendment rights.

“I think that our members need to see that we’re strong, and they need to see how many of us there are,” said Sheila Gilmour, clerk in the registrar’s office and vice president of the University Staff Association, the UMass union for clerical, technical and administrative employees. “One of the problems when you don’t have a union is you’re separated from the group, and you’re alone.”

While Gilmour said she doesn’t expect the Janus case to be decided in the favor of unions, she still sees positivity in organizing actions like the one on campus, saying, “We still want our members to stay with the union.”

“We don’t want people to be short-sighted,” Gilmour added. “We want them to remember that we have weekends because of unions. We have paid family time, vacation time and we have workers who work just a few blocks away, make minimum wage and don’t get sick time.”

This is Christopher J. Sparks’ second year at the University working as web strategist for university communications. He said that he was happy with the event, adding that “it’s a good beginning to a response to the Supreme Court case.”

“I think that conscious-raising is an especially important activity with an organization that has so many people that branches out into every department. I think it’s essential,” Sparks said.

AFL-CIO, UMass’ local 1776 AFSCME union, organized the day of action at UMass. According their Feb. 26 press release, the day’s actions were part of a national mobilization in which workers and community leaders would pledge to stick together and demonstrate why America needs union jobs.

“With 300 similar actions happening across the nation, [we’re] sending a message that working people won’t be deterred by this latest attack on their collective power to join together in unions for good jobs and strong communities.”

The rally saw a diverse set of speakers, including graduate employees, professors, a maintenance technician and an IT support manager. Massachusetts state representative Solomon Goldstein-Rose, whose district includes Amherst, Granby and Pelham, also made an appearance to state his support of union members’ advocacy efforts.

Edwin Murenzi, a PhD candidate in the department of veterinary and animal science and a member of the Graduate Employees Organization, the local UAW, recalled his journey in joining the GEO. He joked to those in the audience about how many graduate students in STEM programs take for granted the work the GEO does. Murenzi said that he wasn’t initially an active member within the GEO; however, this changed after he got into a bicycle accident and sustained an injury that required surgery. Had he not had GEO insurance, the surgery would have cost $15,000, said Murenzi, mentioning that he was only in the hospital for five hours.

“After that surgery, I swore to never be a passive member of GEO again,” he said.

Max Page, a UMass professor of archaeology, was another featured speaker at the rally and spoke on the benefits that union organizing provides.

He told The Massachusetts Daily Collegian prior to speaking at the rally that the UMass campus is the largest unionized worksite in New England, adding, “There are graduate workers, there are clerical staff, there are professional staff, faculty librarians, AFSCME, workers and the janitors who take care of our buildings.”

“A diverse coalition,” Page noted, “all united around the idea that unions are what make for strong, safe workplaces and also build a better commonwealth.”

Ferd Wulkan of the Professional Staff Union at UMass echoed a similar sentiment as Page, saying, “We have more union members at UMass Amherst than anywhere else in New England.”

Tyler Rocco, a member of the MTA, added that it’s “important for members to see how unions are improving the workplace.”

“We’re determined to keep our unions really strong in this time of attack by the right wing and corporate America,” Wulkan said.