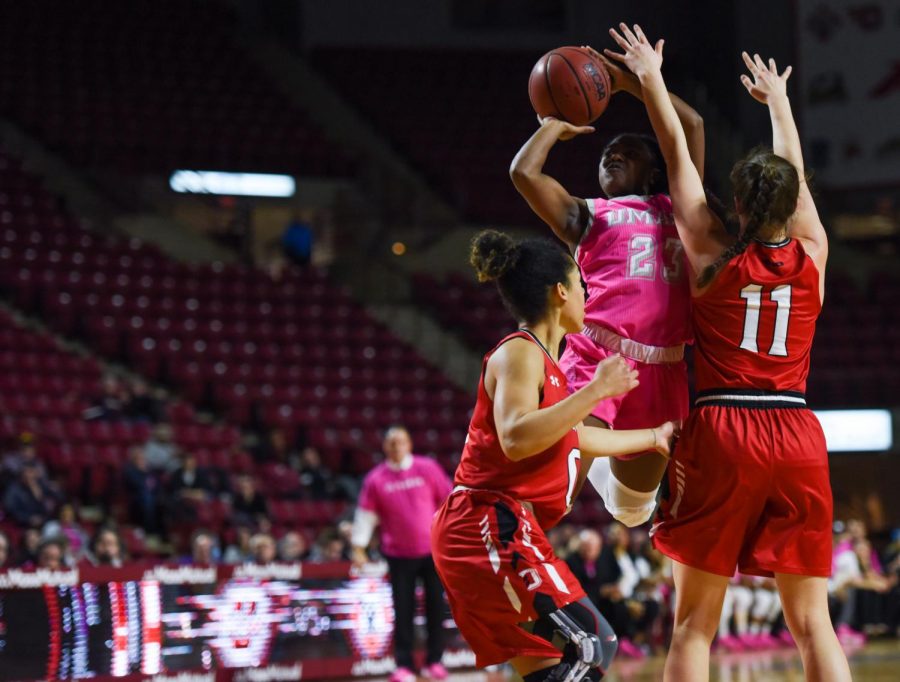 In a game that came down to the wire on Saturday, the Massachusetts women’s basketball team defeated Davidson 70-68 in the annual Play4Kay game. This victory comes after losing a double-overtime matchup earlier in the season against the Wildcats.

The second half saw a series of scoring runs by both teams which kept the game neck-and-neck down the stretch. With the game tied at 68 and two minutes remaining on the clock, senior forward Maggie Mulligan found herself wide open in the post.

Mulligan, who finished with 16 points and 14 rebounds, was able to score to put the Minutewomen up 70-68.

With 1.3 seconds left on the clock, Davidson ended up with the ball in position to tie it. However, the buzzer beater attempted by Davidson guard Kianna Speight fell just short, propelling UMass to victory.

“Our goal is to continue to move the needle with this program,” said UMass coach Tory Verdi. “We weren’t perfect today, but I thought we were resilient down the stretch and we were tough. We were getting our butts kicked on the boards, but we came up on top.”

Early in the game, the Minutewomen (12-15, 4-10 Atlantic 10) couldn’t seem to get much to go their way. They entered the second quarter being out-rebounded 16 to six and entered half time with zero free throw attempts. However, Verdi acknowledges these challenges as a time to embrace adversity and to be resilient as a team.Despite the early struggles to reach the free throw line and to rebound the basketball, UMass didn’t stop fighting. Shooting 6-13 from behind the three-point arc cut the Davidson (10-17, 5-9 A-10) lead to just one at the half.

Though early foul trouble led her to spend some time on the bench in the first half, Minutewomen forward Hailey Leidel came out of halftime on fire, scoring 15 of her 20 points in the second half.

“I had fouls and I knew I was struggling shooting in the first half,” Leidel said. “I just knew I had to be smarter coming into the second half. In the locker room, hearing everyone say, ‘We just need to keep pushing’ and being so close, I think I just buckled down and got the job done.”

Leidel’s performance propelled her closer to the single-season three-point record for the Minutewomen, needing just one more three to tie it.

Despite their early struggles, UMass finished the game with 19 free throw attempts and out-rebounded Davidson by two.

Though any victory feels good, this one felt particularly special for the Minutewomen. The annual Play4Kay game (which aims to spread breast cancer awareness) has had a personal meaning to the Massachusetts team as Verdi’s wife, Heather Verdi, has been combatting breast cancer herself. Saturday’s matchup marked one of the first games in a while that Heather Verdi has been able to attend.

“We love when she comes to our games, no matter what the circumstances,” Leidel said. “But today, I think knowing she was here, knowing we had her name on our warmups and everything [was important].”

Saturday’s game marks the fourth Play4Kay game that Mulligan has played in her UMass career. However, this one hit home a little bit harder.

“Knowing someone personally with breast cancer, it feels a lot more important,” Mulligan said. “Learning about the statistics and just being more educated about it is definitely important to us.”

During a season where Verdi has often preached the need to overcome adversity as a basketball team, Saturday’s game couldn’t have been more symbolic of that. Though the challenges and struggles that have stricken Verdi’s personal life can’t possibly compare to the challenges a team faces on a basketball court, the Minutewomen showcased Saturday that being resilient through adversity ultimately leads to success.

“Every game is tough, and every game is important,” Verdi said. “We’ve had a tough stretch being on the road but coming home to a win here feels pretty good. I’m glad we could pull it out with today being the special day that it is.”