Minutewomen unable to battle back from Boston College’s strong start 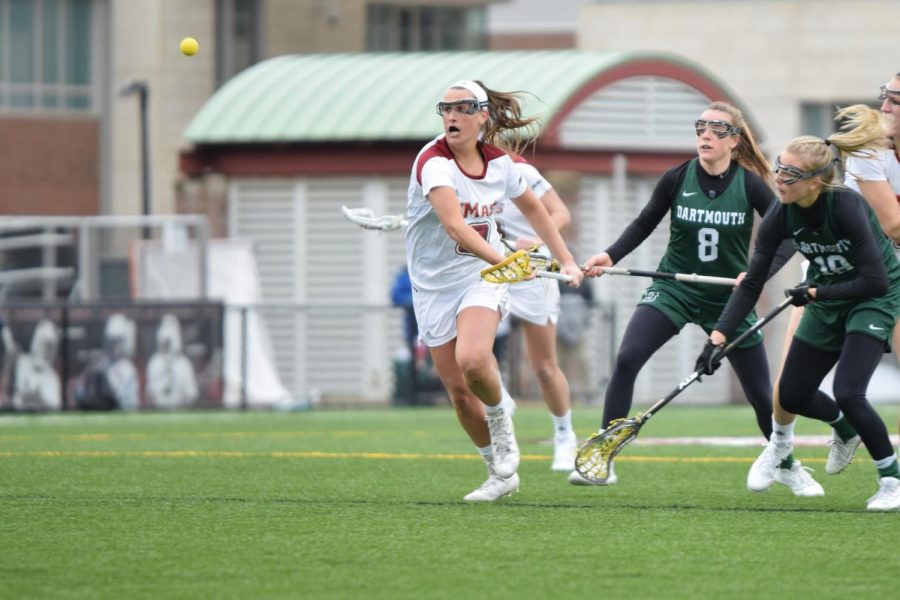 The Massachusetts women’s lacrosse team traveled east to take on No 5. Boston College and despite a surge late in the second half Wednesday, UMass gave up 11 first half goals, leading to a 16-9 loss.

Reigning A-10 Offensive Player of the Year Holly Turner held her own against the Eagles defense, finishing the game with five goals on just six shots on net.

Turner’s four goals in the first 30 minutes of play kept the score within reach. From 26:04 in the first until the end of the half, Holly Turner was the lone scorer for UMass, while BC put up 11 in that time span. Redshirt senior Hannah Burnett scored the game’s first goal.

“She is the leader of our offense,” said McMahon postgame, “Holly has a high lacrosse IQ, and finished her opportunities today, which she had trouble doing on Saturday. It was really nice to see her rebound.”

Sophomore goalie Lauren Hiller put up 11 saves in the defeat.

Coming into the game, it was well known that BC star Sam Apuzzo would be the one Eagle UMass looked to really shut down—the Minutewomen had trouble accomplishing this goal.

Apuzzo contributed four goals and an assist in the impressive all-around performance from BC.

In the 10 minutes of the second half, the Minutewomen kept the Eagles scoreless while putting in three goals of their own. They relied a lot on the depth of their midfield to sustain this run. Unfortunately, after Turner’s goal at 21:19 made it a three-goal game, Boston College did not allow its lead to slip any further.

“We turned the level of intensity up in the second half. It was a little too late, but it is fine as long as we learn from what happened,” said McMahon.

UMass and BC battled for the draw the entire game. Boston College ultimately topped the Minutewomen in that department, winning 16 out of 27.

The draw was an area of expertise for UMass last season, but after losing All-American Hannah Murphy at the draw, a new face is starting to rise: Caitlyn Petro.

Petro was redshirted last year, so these first two games against Dartmouth and Boston College have been the only action she has seen in college.

“Petro was put out on the draw today… it is only the second game of her career,” said McMahon, “but she battled with Sam [Apuzzo] and really stepped it up.”

UMass continues its series of road games this Saturday against Yale, and hopes to get back on the right side of .500.

Justin Ekstrom can be reached at [email protected] or followed on Twitter @JustinJEkstrom.