Southwest Residential Area was cleared out by 11:30 p.m. 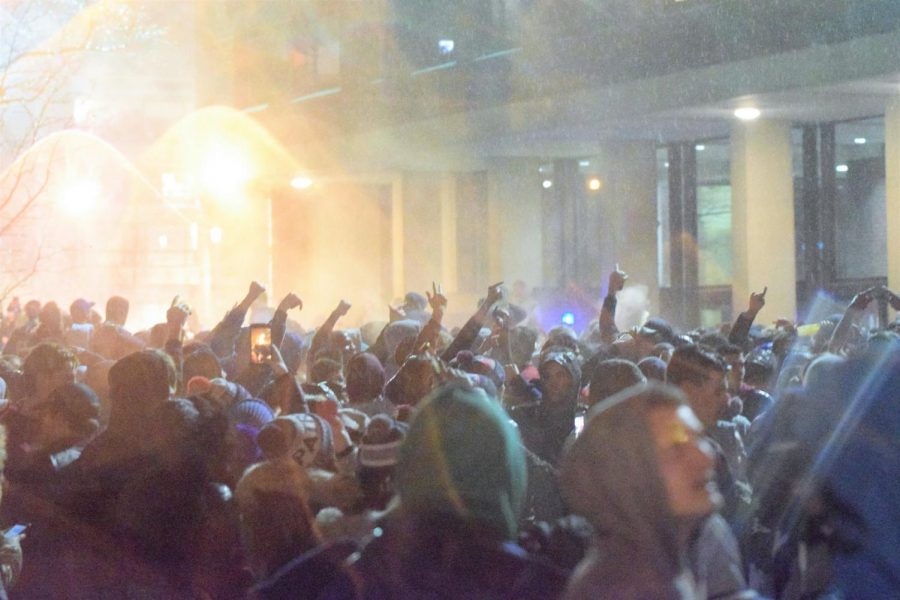 After the New England Patriots’ 41-33 Super Bowl loss to the Philadelphia Eagles on Feb. 4, roughly 2,000 upset students congregated in the Southwest Residential Area of the University of Massachusetts. As the night escalated, tensions between police officers and students rose, resulting in seven students being arrested and $2,685 in property damage in six residential halls, according to Deputy Director of News and Media Relations Mary Dettloff.

As soon as the Super Bowl ended at 10:17 p.m., roughly 2,000 students from Southwest dormitories began to congregate in front of Washington Hall. Obscenities such as, “F*ck the Eagles,” and chants such as “MVP” were yelled in numbers.

Shortly after, violence ensued as multiple fights broke out between students. People soon began smashing TVs and laptops and throwing glass bottles and beer cans. According to the UMass Police, members of the crowd then graduated to hurling smoke bombs and firecrackers.

It wasn’t long before UMPD decided to take action. According to Dettloff, a total of seven students were arrested that night.

Jordan E. Ortiz, 22, of Marshfield, Massachusetts, was one of seven arrested. Ortiz was arraigned on Feb. 5 at Hampshire District Court in Belchertown, Massachusetts on disorderly conduct, rioting and failing to disperse charges. The six other students are set to be arraigned in Belchertown on Feb. 6.

During the congregation, students also destroyed residence hall property according to Dettloff.  Six Southwest residential halls — Washington Hall, John Adams Hall, John Quincy Adams Hall, MacKimmie Hall, Pierpont Hall and Cance Hall — all suffered a total of $2,685 in property damage. Most of the damage was limited to restrooms, such as removed or damaged toilet paper and soap dispensers. In one hall, it was reported that there was a shattered door and kicked-in door vents.

As chaos continued throughout the night, the crowd became rowdier and harder to control. According to Dettloff, UMPD issued several dispersal warnings to the congregation. However, many decided to remain and UMPD resorted to using “PepperBall” gas to clear the area.

UMPD was able to clear the residential area by 11:30 p.m.

“There was nothing else the police could have done,” he said. “They just had to wait for it to fizzle out. Mostly their presence, mostly when the horseback police came in, everyone dispersed.”

In the state of Massachusetts, disorderly conduct can be punishable by up to one year in jail and a fine of either $100, $500 or both.