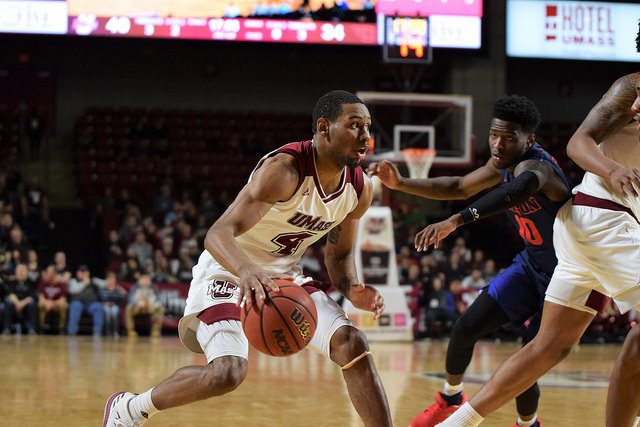 Having snapped a five-game losing streak with a double-overtime win over Dayton over the weekend, the Massachusetts men’s basketball team had a much-needed week off to prepare for Saturday’s rematch with Saint Joseph’s.

After a couple days off early in the week to recover from last Saturday’s excitement, the Minutemen (11-13, 4-7 Atlantic 10) are looking to use the win as a springboard to get back to winning ways.

“It was a good win last weekend, and I think the week off definitely helps everyone,” said freshman Carl Pierre. “It’s a long, grueling season, and everyone gets to recharge, get their legs back under them, and we can get straight back to the grind.”

The Hawks (9-14, 4-7 A-10) are one of three teams tied with UMass in the conference standings and pose several issues offensively.

“I think any time you’re playing against a motion team it can cause you a lot of problems,” UMass coach Matt McCall said. “Motion is unpredictable, so you’ve got to rely a lot on your defensive principles. I thought our switching the first time around really caused them some problems, so we need to be mindful of that.”

It all starts with guard Shavar Newkirk, who’s averaged 17.3 points per game this season and had 22 the first time the two teams met in January, wreaking perpetual havoc in transition.

“Newkirk’s terrific,” McCall said. “I thought in the first game he got a little tired, a little worn down. Some of the shots that he made early he wasn’t able to make late, but he’s such a dynamic scorer, it starts with him in transition, you’ve got to be able to get back, get your defense set, and keep him out of the lane.”

St. Joe’s parlays Newkirk with a pair of standout forwards to cause problems inside and out—senior James Demery has matched Newkirk’s scoring output this season at 17.3 per night, while freshman Taylor Funk is one of the best shooting big men in the conference, hitting at a 41 percent clip from deep this season.

The Minutemen won the first matchup on Jan. 14, needing a major second half comeback and overtime to earn a 72-69 win. Guard Luwane Pipkins had 27 points to lead that comeback win, while Pierre knocked down five triples en route to a 17-point performance.

The game really flipped when McCall went small, throwing out five guards to slash and kick, and the Hawks had no answer. Though they were small, the Minutemen were attacking the paint with speed, and it paid dividends.

“When we played them up here, we weren’t very aggressive in the first half getting into the paint,” Pierre said. “We had a comeback win in the second half, and we doubled our paint touches, and I think that’s what we need to do down there; be aggressive, get into the paint and make plays.”

With seven games left on the conference slate, every game truly counts; an extremely crowded middle class sees just one game separating ninth and 14th place, and a single win could be the difference to get a bye in the A-10 tournament.

“Guys have had the right mindset,” McCall said. “They’ve had great energy, they haven’t come in sulking—they’ve come in ready to work, so we’ll see if that translates on Saturday.”