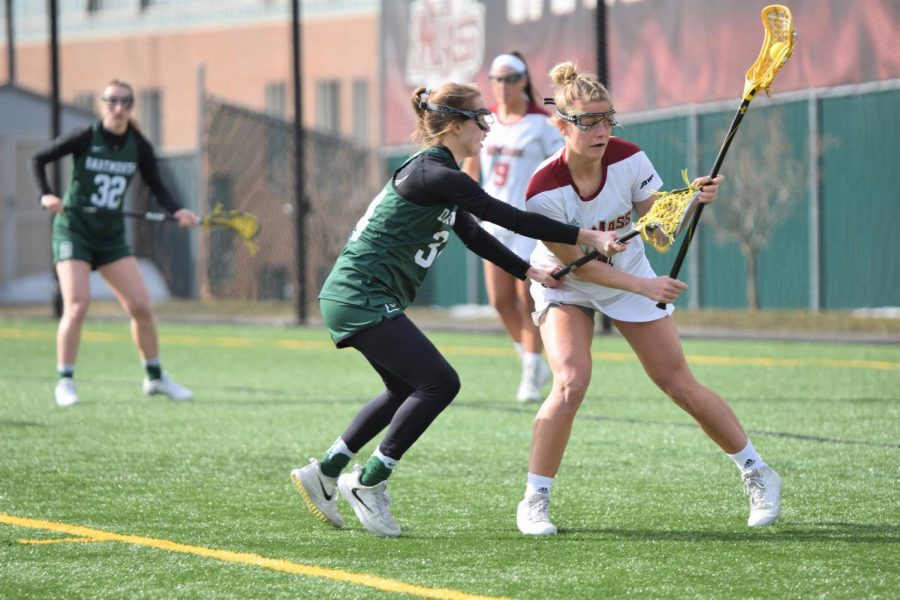 “[Duperrouzel] was tough,” said UMass head coach Angela McMahon. “She was a physical, strong player that really muscled her way in there. She really did a great job and stepped up for them.”

Duperrouzel, who leads the team with 13 points on the season, started the game by scoring four quick goals that were part of an early eight-goal run in the first half for the Bulldogs.

“We’ve got to start the game better,” McMahon said. “We also have to put our offensive opportunities away.”

Despite winning the shot battle 34-32 in the game, the Minutewomen failed to convert the majority of their shots. This was especially evident for UMass in the second half, as it only scored four goals on 24 shots.

“When we win the draws and loose balls we’re capable of putting the ball away and generating offense,” McMahon said. “We also shot 4-24 in the second half, so that shooting percentage isn’t really going to win us any games.”

Yale owned Massachusetts 18-7 in draw controls, something the Minutewomen have put heavy emphasis on after losing key draw specialist Hannah Murphy, who graduated at the end of last season.

“We just have to focus in and spend more time with it, just dig in,” said McMahon on draw controls. “A lot of it is skill, and just us improving our skill. In terms of when the ball hits the ground, it becomes more of a 50-50 ball … just putting our bodies in the right position there.”

The Minutewomen have distributed draw circle responsibilities this year by using a committee of players, instead of using one individual specialist. Kiley Anderson leads the team with six draw controls, followed by Stephanie Croke and Brinley Anderson with five each, along with Abby Walker and Caitlyn Petro with four.

Not letting the atmosphere of the game get to her, Kaitlyn Cerasi put her head down and went to work, scoring a hat trick on the day for UMass.

“[Cerasi’s] kind of been struggling in her shooting, so it was good to see her put a few [goals] away,” McMahon said.

Cerasi, a sophomore, is fourth on the team in scoring with five goals on the season.

In what seemed to be something of a second-half surge, the Minutewomen went on a three-goal tear that closed the gap on Yale, bringing the score to 12-8. The surge was not UMass’ only prominent run of the game as it scored three straight to end the first half.

“It took us a little while to get into a groove,” McMahon said, “but we battled through that and went on a little bit of a run that created some offense for us.”

Saturday’s game against Yale was the third of eight non-conference games before UMass opens up Atlantic 10 play on March 29 against Saint Joseph’s. Now 1-2 on the season, UMass still has four more road games to play before they return home to Garber Field on March 21 to face Harvard.

The Minutewomen will travel to Marist College, where UMass assistant coach Jana Drummond was previously employed, for a game on Wednesday at 4 p.m.