Huskies top line too much for Minutemen 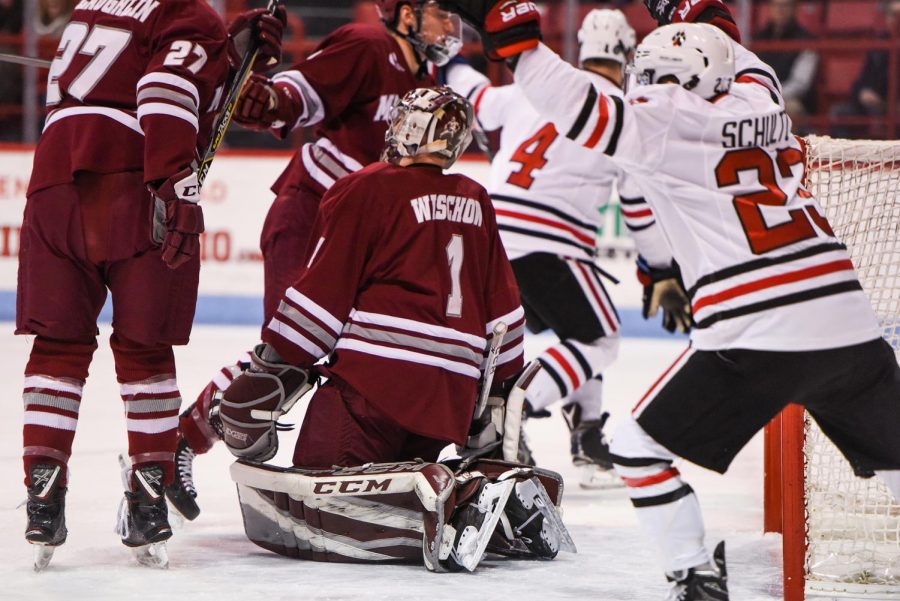 BOSTON—The Massachusetts hockey team hurdled expectations in the 2017-18 season by mustering the biggest one-year turnaround in the NCAA by winning 12 more games than a season ago. UMass’ eighth-place finish in the Hockey East Association earned the Minutemen a home playoff series for the first time in 11 years and UMass took the series two games to one over Vermont.

Matched up with second-place Northeastern in the quarterfinal round, the Minutemen weren’t expected to upset the offensively gifted Huskies.

After a tight Game 1 that saw Northeastern sneak off with a 3-2 win, the dam broke for the Huskies in Game 2 as Northeastern skated away with a 7-2 victory, sweeping the series.

“We’ve had a couple games this year similar to this where the score is pretty lopsided but I look up at the shot chart and it’s dead even,” UMass coach Greg Carvel said. “Second period things got away from us but ultimately we wanted to try and control the big (Northeastern) line and it’s hard to do.”

The Huskies’ trio of Dylan Sikura, Adam Gaudette and Nolan Stevens combined for six points in the series-deciding win at Matthews Arena Saturday night, despite the Minutemen leading 30-28 in shots.

“Sikura is at a different level,” Carvel said. “I think he’s the guy that really makes the whole thing go. I really respect him as a player.”

Like Game 1, Northeastern led 2-0 after 20 minutes on goals from Jeremy Davies and Stevens; however, Gaudette smashed a one-time blast past UMass goalie Ryan Wischow on the left faceoff dot 3:21 into the second period, setting in motion a dominant Huskies second period that proved insurmountable for the Minutemen.

“We gave up a couple of 2-on-0s which is uncharacteristic of us,” Niko Rufo said. “They have some great players over there and you can’t give them a sniff. We just gave them too many chances.”

Sikura, Brandon Hawkins and Stevens added onto the Northeastern lead and the Huskies broke it open to 6-0 with 40 minutes in the books.

UMass didn’t fold in the third as John Leonard and Brett Boeing notched goals to spoil Northeastern goalie Cayden Primeau’s shutout bid. Lincoln Griffin tallied the final goal for the Huskies at 8:32 of the final frame.

“I know the score was lopsided but my kids played hard, they always play hard,” Carvel said. “Even in the third period I challenged them to come out and continue to compete and manage the puck and try to score goals and they did a real good job at that.”

Wischow made 14 saves in two periods of work while Brad Arvanitis played the entire third and stopped seven shots.

“The first period obviously we gave up two but in the locker room we knew we could come back. We’ve been down by two a few times,” Rufo said. “We kind of left Wischow out to dry tonight. He still made some huge saves. It could’ve been way more out of hand than what it did.”

Only losing Rufo and senior Jake Horton to graduation, the Minutemen will bring back the bulk of their roster for what should be a bigger and better 2018-19 season.

“I’m very excited for the future of the program, we took really big steps forward this year,” Carvel said. “You have to go through these experiences, so ideally next year we’ll be hosting a quarterfinal. But having played against a very good team was definitely a learning experience for our group.”